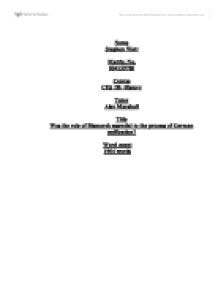 Was the role of Bismarck essential to the process of German unification?

Name Stephen Watt Matric. No. 004159780 Course CES 2B: History Tutor Alex Marshall Title Was the role of Bismarck essential to the process of German unification? Word count 1904 words Was the role of Bismarck essential to the process of German unification? Otto Von Bismarck was Prussian Chancellor after 1862 and he is the person given most credit for the achievement of a unified Germany in 1871. His contribution is most definitely immense but it would be too simplistic to regard him as the only factor in the equation. His influence was most obvious during the period of 1862 to 1870 but consideration must be given to the years before 1862, as it was during the period of 1848 to 1860 that German nationalism began to gather momentum. This was pushed along by the growth in industrialisation and liberalism pushing for greater economic freedom for trade which would occur under a united Germany. In March 1848 representatives from 6 States including Prussia issued a declaration for a single German parliament this was by the establishment of a vorparlament or pre-parliament. This assembly was to draw up a conclusion for a unified state. The aim of the assembly was to establish a united German State with a constitutional monarchy.1 After the revolution of 1848 the German people began to take an interest into the political life of the nation. ...read more.

Bismarck did not support the diets actions instead he invited Austria to assist in enforcing the terms of the treaty of London. Austria reluctantly supported Prussia in demanding the immediate withdrawal of the new constitution. When this did not happen war was declared with Denmark. This led to an easy victory for Prussia and Austria. By the terms of the treaty of Vienna Denmark was forced to give up Schleswig and Holstein. Austria suggested that the Duke of Augustenberg should rule the two states. Prussia did make the offer however the conditions they placed upon it forced the duke to decline the offer. Austria ruled Holstein while Schleswig was ruled by Prussia. Through this war with Denmark Bismarck had been able to test the fighting ability of the Prussian army. The war had been a "foregone conclusion"4. Nevertheless Prussia's reputation had been enhanced and fuel had been provided for future disputes between Austria and Prussia. The Austro-Prussian war In preparation for war with Austria Prussia had to secure the support from other nations. She won support from Russia by not giving assistance to the Polish revolt. In October 1865 Bismarck met with Napoleon III. It seems napoleon came away from the discussions under the impression that he would be rewarded with the French annexation of Belgium or land on the Rhine for French neutrality in any war between Prussia and Austria. ...read more.

The effect was to arouse national anger in both countries. Within a matter of days, French excitement in Paris led to a declaration of war on Prussia. The war that followed went on for too long and there were too many casualties for Bismarck to be lenient with the French "The enormous sacrifices in Blood and treasure which the German people have made in this war, together with all our present victories, would be in vain if power of the French were not weakened for attack and the defensive strength of Germany were not increased."8 France was forced to pay �200,000,000 compensation and the territories of Alsace and Lorraine were lost. However the principal objective of the conflict was too achieve German unification. This was achieved at Louis XIV's palace at Versailles with the successful negotiation of the admission of the South German States to the Northern German Confederation and the offer of the Imperial title to King Willhelm I. As the essay has shown although Bismarck's contribution towards the unification was massive, through the three wars with France, Denmark, and Austria, to say unification would not happen with out Bismarck is too simplistic. Rising nationalism and economic awareness helped a great deal. In effect German unification would have occurred with or without Bismarck. Bismarck merely speeded up the process "Bismarck's task of Unifying Germany was made easier by circumstances. If He played his hand with great skill it was a good one in the first place. ...read more.