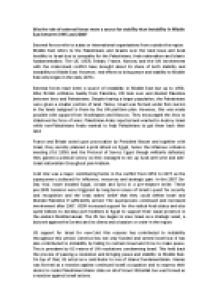 The superpowers continued and increased involvement after 1967. USSR increased support for the radical Arab states and also spent billions to develop port facilities in Egypt to support their naval presence in the eastern Mediterranean. The US too began to view Israel as a strategic asset, a bulwark against the Soviets and its clients and a bastion or order in the region. US support for Israel for non-Cold War reasons has contributed to instability throughout this period. America has not only funded and armed Israel but it has also contributed to instability by failing to restrain Israel and force to make peace. This is prevalent by US vetoes of UN resolutions condemning Israel. This held back the process of passing a resolution and bringing peace and stability to Middle East. On top of that, US acted as a contributor to rise of Islamic fundamentalism. Hamas was formed as a reaction against continued Israeli occupation and to express their desire to create Palestinian Islamic state on all of Israel. ...read more.

The superpowers were more actively involved in the 1973 war. The last phase of the war despite being the most serious superpower confrontation in the Middle East, they eventually worked together to stop the fighting. At the 1979 Camp David Accords, Israel and Egypt signed a peace treaty, the first between Israel and an Arab state with US mediation. Mostly importantly, the role of the Norwegians in facilitating the 1993 Oslo Accords which offered the possibility, for the first time, of a two state solution to the Israeli-Palestinian issue. In the 1991 Madrid Conference, USSR, US and Spain invited leaders from the Middle East to Madrid to discuss possible peace proposals, which later developed into the Oslo Accords. The Oslo Declaration included recognition of Israel?s right to exist, PLO as official representative of Palestinian people and the end of us of violence. In conclusion, after 1973, it is possible to suggest that external forces became more a force for stability as superpower rivalry in the Middle East ceased, and as the US began to play a larger role as peacemaker. ...read more.