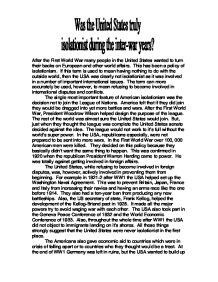 Was the United States truly isolationist during the inter-war years?

After the First World War many people in the United States wanted to turn their backs on European and other world affairs. This has been a policy of isolationism. If this term is used to mean having nothing to do with the outside world, then the USA was clearly not isolationist as it was involved in a number of important international issues. The term can more accurately be used, however, to mean refusing to become involved in international disputes and conflicts. The single most important feature of American isolationism was the decision not to join the League of Nations. America felt that if they did join they would be dragged into yet more battles and wars. ...read more.

The United States, while refusing to become involved in foreign disputes, was, however, actively involved in preventing them from beginning. For example in 1921-2 after WW1 the USA helped set up the Washington Naval Agreement. This was to prevent Britain, Japan, France and Italy from increasing their navies and having an arms race like the one before 1914. They also had a ten-year ban from producing any new battleships. Also, the US secretary of state, Frank Kellog, helped the development of the Kellog-Briand pact in 1928. It made all the major powers try to avoid waging war with each other. The USA also took part in the Geneva Peace Conference of 1932 and the World Economic Conference of 1933. ...read more.

However, by refusing to join the League of Nations it fatally weakened that organisation. In the 1930's it done nothing to stop the invasion of Manchuria by Japan or to stop Hitler making aggressive policies and growing dangerous sized armed forces. Depending on how you see the situation, America was not really an isolationist country due to the things it got involved in. It was closely involved in stopping disputes, trading goods, giving out loans and having allies. Maybe the only time when it was seriously isolationist was when it didn't stop the invasion of Manchuria or by stopping the growth of Nazi Germany. In the end the USA, the world's most powerful country, did nothing to prevent Nazi aggression and the coming of World War Two. This was the terrible result of isolationism. ...read more.