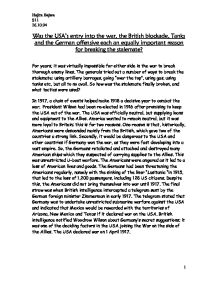 Was the USA's entry into the war, the British blockade, Tanks and the German offensive each an equally important reason for breaking the stalemate?

Was the USA's entry into the war, the British blockade, Tanks and the German offensive each an equally important reason for breaking the stalemate? For years, it was virtually impossible for either side in the war to break thorough enemy lines. The generals tried out a number of ways to break the stalemate; using artillery barrages, going "over the top", using gas, using tanks etc, but all to no avail. So how was the stalemate finally broken, and what tactics were used? In 1917, a chain of events helped make 1918 a decisive year to combat the war. President Wilson had been re-elected in 1916 after promising to keep the USA out of the war. The USA was officially neutral, but supplying loans and equipment to the Allies. America wanted to remain neutral, but it was more loyal to Britain; this is for two reasons. One reason is that, historically, Americans were descended mainly from the British, which gave two of the countries a strong link. Secondly, it would be dangerous to the USA and other countries if Germany won the war, as they were fast developing into a vast empire. So, the Germans retaliated and attacked and destroyed many American ships which they suspected of carrying supplies to the Allies. ...read more.

From the start of the war, both armies tried to prevent each other from receiving essential supplies to its soldiers. The British had been blockading German ports since 1914. The blockade was supposed to strangle German industry so that it could not supply the German army. The loss of supplies reduced German trade from $5.9 billion in 1914 to just $0.8 billion in 1917. By 1917, Germans were experiencing severe shortages; both civilians and soldiers were suffering. Russia, prior to the war, was worried about the growing power of Germany, and signed the triple entente with Britain and France. The objective of the alliance was to encourage co-operation against the perceived threat of Germany. However, it all changed in 1917 when the Russian revolution brought in a communist government. Now Russia was out of the war and had made peace with Germany, therefore the German Army no longer had to fight a two front war. It could transfer all its troops back to the Western Front. Despite the good news of the Russian surrender, the Allies blockade of German ports had starved the economy of raw materials and the population (including the soldiers) of food. Worse still, the USA was transferring tens of thousands of its troops to France per month. ...read more.

By 1918, German forces were using armour-piercing machine-gun bullets to deadly effect, and had learnt how to adapt field guns to fire at tanks. Tanks were virtually impossible to miss because they were so large and slow; a sign that the invention had not yet completely come of age. The German offensive was an important factor in breaking the stalemate, but the USA's entry into the war and the blockade triggered Ludendorff's attack. Tanks did play a vital role for the Allies, but didn't really have much of an effect in overcoming the stalemate, as there were a number of technical difficulties attached. The British blockade, however, starved thousands of Germans of food and thousands of other people died of malnourishment. The USA's entry into the war ensured reinforcements on the Western Front and a continuous supply of food and materials. The Allies and the Germans knew that if the war went on there would be a large number of fresh US troops ready for war coming on to the Allied side. The Germans would have realised the USA would have been a difficult problem to overcome in their battle. Hence, the blockade and the USA's entry were the two most important points in overcoming the stalemate. Hajira Bajwa S11 26.10.04 1 ...read more.