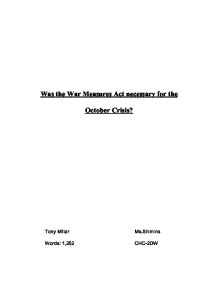 Was the War Measures act necessary for the October Crisis

Was the War Measures Act necessary for the October Crisis? Tony Millar Ms.Shimins Words: 1,252 CHC-2DW There were many events leading to the October crisis, some may say that the decisions taken by the Front de Liberation du Quebec (FLQ) were rational, others not. But any hostage situation when lives are being threatened should be stopped by any means necessary. The War Measures act requested by Premier of Quebec Robert Bourassa, directed by Pierre Trudeau and applied by the Governor General of Canada Roland Michener was a very necessary step to take due to the previous acts of terrorism and threats by the FLQ, prior to October 1970. The October Crisis occurred in October 1970, when two government officials were kidnapped by the FLQ in the province of Quebec. The first kidnapping occurred on October 5th. The victim was British Trade Commissioner James Richard Cross, who was taken shortly after he was leaving work on his way to his car. The second kidnapping was shortly after, on October 10th, when the FLQ kidnapped the Minister of Labour and Vice Premier of Quebec Pierre Laporte, while he was playing football with his nephew. ...read more.

Another act of destruction occurred only 13 months before the two kidnappings, when the FLQ personally went into the private home of Montreal Mayor Jean Deapeau. During this break and enter, they carefully planted a bomb in the toilet at his house, so inspectors would not find it after doing a thorough search of the house. There were no injuries at the time of the explosive, but it could have easily ended the life of not only the mayor, but also his entire family. Even after acts of terrorism like this, the province of Quebec and Montreal police were left powerless, as they needed warrants to make any searches of suspected members, which often took months and were ineffective. Even if one argues the War Measures Act was not necessary because of only the two kidnappings, surely the events leading to that would change ones mind. These attacks were carried out by the 6th wave of the FLQ, and were the most violent in means of carrying their message across. This group called themselves the 'Liberation Cell.' Many of the finances were also granted from other violent crimes, such as many infamous bank robberies. ...read more.

It was also recorded that in both Francophone and Anglophone communities 9 out of 10 citizens supported the War Measures Act, as recorded after the murder of Pierre Laporte. The Front de Liberation du Quebec not only posed a threat to the final living hostage James Richard Cross, but also to Canadian citizens due to their extremely violent past, and noted weapons and explosives. During the kidnapping of Pierre Laporte, 4 men came. It was seen that 3 of them had assault rifles, and third with a revolver. Due to these known facts, death's caused by mailbox bombings, and the explosion in the Montreal stock exchange, the FLQ is clearly a threat to general public, as much as they are towards the British Trade Commissioner. The mission of any military and armed police force is to protect the public and citizens of Canada from any threat or danger regarding their lives or safety; therefore it seems only appropriate to have soldiers on the streets of a terrorist known zone. Due to all the reasons stated above, which include a very violent history of attacks, ending a hostages life in only one week and endangering the general public, it was obviously very needed that Pierre Trudeau intact the War Measures Act to protect any threat to Canada's safety and power as a country, and handled the situation appropriately. ...read more.

This is a very detailed and well written response to a difficult question. Some points could be more clearly linked to the question and the author could consider the counter-argument in more detail to add balance. Overall, this is a convincing response though.