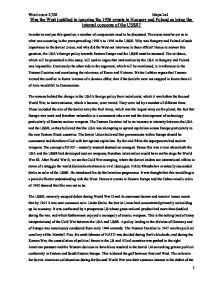 Was the West justified in ignoring the 1956 events in Hungary and Poland as being the internal concerns of the USSR?

Was the West justified in ignoring the 1956 events in Hungary and Poland as being the internal concerns of the USSR? In order to analyse this question, a number of components need to be discussed. The scene must be set as to what was occurring in the years preceding 1950's to 1956 in the USSR. Why was Hungary and Poland of such importance to the Soviet Union, and why did the West not intervene in these affairs? Hence to answer this question, the USA's foreign policy towards Eastern Europe and the USSR must be assessed. The evidence, which will be presented in this essay, will seek to argue that intervention by the USA in Hungary and Poland was impossible. Conversely the other side to the argument, which will be mentioned, is in reference to the Truman Doctrine and mentioning the relevance of Korea and Vietnam. Walter Lafaber argues that Truman viewed the conflict in Korea in terms of a domino effect, that if the Soviet's were not stopped in Korea then all of Asia would fall to Communism. The reasons behind the change in the USA's foreign policy from isolationist, which it was before the Second World War, to interventionist, which it became, were varied. They were led by a number of different fears. These included the size of the Soviet army the Red Army, which was the largest army on the planet, the fact that Europe was weak and therefore vulnerable to a communist take over and the development of technology particularly of Russian nuclear weapons. The Truman Doctrine led to an increase in intensity between the USA and the USSR, as they believed that the USA was attempting to spread capitalism across Europe particularly to the new Eastern Block countries. The Soviet Union believed that governments within Europe should be communist and therefore allied with her against capitalism. By the mid fifties the superpowers had nuclear weapons. ...read more.

Khrushchev did not want to accept any changes in Poland and Gomulka's return to authority. However he changed his mind because of Gomulka's persuasions, who assured him that the authority would be still in communist's hands, provided that there would be a reform of political administration. Gomulka put the emphasis on necessity of being on good terms with the USSR but at the same time he stressed the necessity to base them on new principles. The most important aspect was the independence of Poland and creation of new relations with the USSR. The purpose of Gomulka and his team was to continue to build the socialist system in Poland. PZPR was to be based on so-called principles of democratic centralism, which could widen the sphere of people's laws. However this system had to be different from the one Western country had. On October 20th 1956 during the meeting of KC PZPR, in his program speech Gomulka said that the highlight authority in Poland would be 'proletariat dictatorship'. Thus it is prevalent that Khrushchev was justified in fearing that if Gomulka took control in Warsaw and removed the most orthodox (and pro-Soviet) members of the Polish leadership, Poland might then seek a more independent (i.e. Titoist) course in foreign policy. In a hastily arranged meeting with Gomulka and other Polish leaders, the CPSU delegates expressed anxiety about upcoming personnel changes in the PZPR and urged the Poles to strengthen their political, economic and military ties with the Soviet Union. A Western historian, Richard Hiscocks, suggests that another factor restraining Khrushchev from taking military action was the fear that armed conflict would spread to other East European Communist states.2 In his history of Soviet foreign policy, Adam Ulam concluded that on October 19 Khrushchev faced the prospect of another Russo-Polish war. According to Ulam, the problem raised by such a war was not that Poland could successfully resist, but that 25 million Poles could make the war last long enough to create uncertain repercussions in the ...read more.

Lafeber in accord with McCormick argues that Truman relied on memories of Nazi appeasement, Japanese appeasement in Manchuria and now Appeasement of Stalin's expansionary aims would set off another world war and thus intervention was not necessary but self evident. "US interests everywhere seemed to be at stake. For if Stalin and Kim won in Korea, Truman believed, the Soviets would hit more pivotal interests, especially Japan and Western Europe. The president reached these conclusions largely through his use of history."(American Age, 513) Therefore the Truman Doctrine was applied in Korea and Vietnam but it was impossible for the USA to intervene and assist Hungary and Poland like they did with Korea and Vietnam, as they were the internal concerns of the USSR. Khrushchev already understood that the Soviet involvement in Hungary had damaged East and West relations especially when the World Press was now in the middle of the crisis. Once the USSR acquired nuclear weapons - four months after Hiroshima in the case of the atom bomb (1949), nine months after the USA in the case of the hydrogen bomb (1953) - both superpowers plainly abandoned war as an instrument of policy against one another, since it was the equivalent of a suicide pact. The United States scaled down its military significantly after World War II, and the Korean War just ended in 1953. The US was not ready to mobilise as quickly as needed for such a short conflict. Even if mobilization was fast, the time and distance to get there was not feasible or in the best interests of the US. The US was not interested in picking a fight with the USSR. The Cold War to the US was based on containment of communism, not actual head to head military battles between the super powers. Inadequate mobilisation from Western powers and the US lack of desire for confrontation with the USSR military, not to mention the possible threat of an eminent World War III because the two countries both possessed nuclear weapons, helped to ensure the Western powers stayed out of the crisis in Hungary and Poland. ...read more.