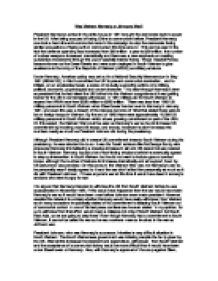 Was Vietnam Kennedy or Johnson's War?

Was Vietnam Kennedy or Johnsons War? President Kennedy's arrival in the white house in 1961 brought the democrats back to power in the US. After being accused of losing China to communism before, President Kennedy now took a hard-line anti-communist route in his campaign to stop the democrats facing similar accusations of being soft on communism this time around. This can be seen in the fact that defence spending was increased from $40 million a year to $56 million, the number of nuclear weapons increased dramatically and there was a new emphasis on meeting subversive movements through the use of specially trained forces. These Special Forces became known as the Green Berets and were soon deployed in South Vietnam to give assistance to the Army of the Republic of Vietnam (ARVN) as military advisors. Under Kennedy, American policy was set out in a National Security Memorandum in May 1961 (NSAM 52). In this it committed the US 'to prevent communist domination...and to initiate, on an accelerated basis, a series of mutually supporting actions of a military, political, economic, psychological and covert character.' It is clear through Kennedy's term as president that he had taken the US further into the Vietnam quagmire and it was getting harder for the US to contemplate withdrawal. ...read more.

Johnson was the president that got America really into the Vietnam War. No other president before had the will or even really considered sending in American soldiers into Vietnam. Eisenhower had sent advice, money and gave support and Kennedy continued this with a few extra advisors, but neither had shown as much commitment to South Vietnam as Johnson did. Johnson, in a secret memorandum of 1963 stated that: "the president expects that all senior officers of government will move energetically to ensure the full unity and support for... US policy in Vietnam" this shows that Johnson wanted the whole of the US, and especially Congress to agree with him being involved in the Vietnam War. Especially after the Gulf of Tonkin incident and the Tonkin Gulf Resolution of 1964 it showed that the US were so ready to attack but were just waiting for a reason to attack. This shows Vietnam was Johnson's war if he was prepared to take a minor event and use it as the reason why the US should get even more deeply involved then they already war. He used it to introduce things such as Operation Rolling Thunder. However, even if the war was Johnson's war, that's not to say it wasn't his war by choice. ...read more.

In conclusion, I believe that Vietnam was Johnson's war instead of Kennedy's. With the huge increase in US involvement in South Vietnam and the war during Johnson's presidency, it is clear to see how the Vietnam War became such a huge issue for the USA and Johnson personally. The Vietnam War eventually overwhelmed Johnson in not just his policies but in his personal life as well. It affected him so badly that he decided not to run for another term as president tin h 1968 elections. This was a huge feat considering Johnson had inherited the Vietnam War from Kennedy and had not chosen to be involved in it himself. Any retreat, especially in the height of cold war tensions, would have been seen as cowardly and, without hindsight, could have put America at risk. Vietnam didn't affect Kennedy anywhere near this much. It is also clear in the way that the US troop numbers stationed in Vietnam increased from 16,000 to 500,000 during Johnson's presidency that he was a lot more involved in the war then Kennedy was. It was during Johnson's time as president the Vietnam War turned from a limited police action into a war, and although an undeclared one, this is the fact that makes Vietnam Johnson's war. ?? ?? ?? ?? ...read more.