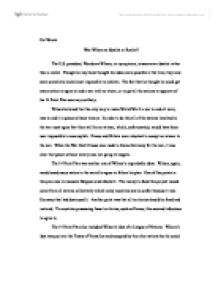 Was Wilson an Idealist or Realist?

Cat Wowk Was Wilson an Idealist or Realist? The U.S. president, Woodrow Wilson, in my opinion, is seen as an idealist rather than a realist. Though he may have thought his ideas were possible at the time, they now seem unrealistic and almost impossible to achieve. The fact that he thought he could get every nation to agree to end a war with no victor, or to get all the nations to approve of his 14 Point Plan was very unlikely. Wilson believed that the only way to make World War I a war to end all wars, was to end it in peace without victory. ...read more.

The 14 Point Plan was another one of Wilson's improbable ideas. Wilson, again, would need every nation in the world to agree to follow his plan. One of the points in this plan was to evacuate Belgium and rebuild it. The money to fund this project would come from all nations collectively which many countries saw as unfair because it was Germany that had destroyed it. Another point was that all territories should be freed and restored. To countries possessing these territories, such as France, this seemed ridiculous to agree to. The 14 Point Plan also included Wilson's idea of a League of Nations. ...read more.

Wilson was stubborn and unwilling to make any changes to the treaty and therefore the senate did not approve it. Wilson was na�ve to assume that the other nations would willingly agree to his terms with no argument. Wilson had good ideas, with good intentions, but none of them could have worked because he was unwilling to negotiate or compromise to please the other countries. He concentrated too much on his 14-Point Plan and his idea of peace without victory that he didn't see things as they were but as they could be. Wilson was an idealist for believing that his ideas were probable when they weren't. ...read more.