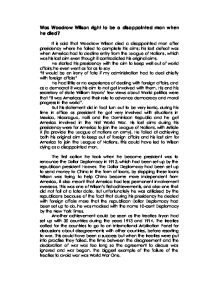 Was Woodrow Wilson right to be a disappointed man when he died?

Was Woodrow Wilson right to be a disappointed man when he died? It is said that Woodrow Wilson died a disappointed man after presidency where he failed to complete his aims; his last defeat was when America had to decline entry from the League of Nations, which was his last aim even though it contradicted his original aims. He started his presidency with the aim to keep well out of world affairs; he even went as far as to say "It would be an irony of fate if my administration had to deal chiefly with foreign affairs" He had little or no experience of dealing with foreign affairs, and as a democrat it was his aim to not get involved with them. His and his secretary of state William Bryans' few views about World politics were that "it was Americas and their role to advance democracy and moral progress in the world". But his statement did in fact turn out to be very ironic, during his time in office as president he got very involved with situations in Mexico, Nicaragua, Haiti and the Dominican Republic and he got America involved in the First World War. His last aims during his presidency were for America to join the League of Nations, with Article X (to provide the League of nations an army). He failed at achieving both his original aim to keep out of foreign affairs and his last aim for America to join the League of Nations, this could have led to Wilson dying as a disappointed man. ...read more.

He also sent troops to the Dominican Republic. These were small failures to reach his aims. Wilson's greatest problem that stopped him keeping out of foreign politics, as he wanted to was the First World War. At fist he was sure that America didn't have to get involved in European problems, the popular opinion was of disbelief that the civilised Europe couldn't sort it's problems out peacefully, and delight that America was not involved in it, keeping to isolationism, "no entangling alliances". Wilson actually said, "America had to be neutral in thought and deed". But the consequences of the war would involve America so secretly Wilson did care about who won the war, because it was in Americas interests for the Allies to win. Also within American society there were different groups who had stuck together or merged together in America, Irish-Americans and German-Americans wanted Britain to lose, but the vast majority had emigrated from Britain, France and Russia, and supported the Allies. To gain a stronger public support from America for the victory of the Allies the question put to the public was "Are you American?" The Allies were seen to be fighting for democracy in Europe, something America also fought for. If the person did not support the Allies they were seen to be not supporting democracy, thus were not American but just an immigrant. The public opinion was won over and Wilson had succeeded in gaining support for the Allies. ...read more.

He also wanted to get Article X as well, which meant that America would provide an army to work for the League of Nations. His demands were too high and he faced much opposition form America. The Republicans also named the 'irreconcilables' were against the League of Nations and Article X. Reservationists wanted to join the League of Nations but without the Article X, , as did the senate. This means that Wilson could have got enough support to join the League of Nations but he would not negotiate to reach his aim, he wanted America to both join the League of Nations and with Article X. In 1920 he and his party were voted out of power, Wilson was ill in health and died soon after, disappointed because he had failed at reaching his aims during his life. If another President had done all the things Wilson did, with the success Wilson had, they would not be disappointed. Wilson achieved many things, he set up a better government in Mexico, gained America respect form the world, gained America much wealth and brought America through a World War with little loss. All his achievements were attained with little cost to America, but gained America much. But because all the things that Wilson did achieve where almost opposite to what he actually wanted he did not do well and in the end he died a disappointed man, his presidency had good aims which at any other time would have been successful but because of the situations he had to cope with he could not carry out and be successful or happy in completing his aims. ...read more.