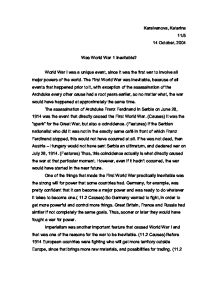 Karaivanova, Katerina 11/5 14 October, 2004 Was World War 1 Inevitable? World War I was a unique event, since it was the first war to involve all major powers of the world. The First World War was inevitable, because of all events that happened prior to it, with exception of the assassination of the Archduke every other cause had a root years earlier, so no matter what, the war would have happened at approximately the same time. The assassination of Archduke Franz Ferdinand in Serbia on June 28, 1914 was the event that directly caused the First World War. (Causes) It was the "spark" for the Great War, but also a coincidence. ...read more.

Germany, for example, was pretty confident that it can become a major power and was ready to do whatever it takes to become one.( 11.2 Causes) So Germany wanted to fight, in order to get more powerful and control more things. Great Britain, France and Russia had similar if not completely the same goals. Thus, sooner or later they would have fought a war for power. Imperialism was another important feature that caused World War I and that was one of the reasons for the war to be inevitable. (11.2 Causes) Before 1914 European countries were fighting who will get more territory outside Europe, since that brings more raw materials, and possibilities for trading. (11.2 Causes) At a point though, the territory they could get was already divided among them. ...read more.

Throughout the years prior the war, two major alliances appeared in Europe. One was the Triple Alliance between Germany, Italy and Austria - Hungary. (The Causes) The other one was the Entente between Russia and France. (Karpilovski) So, if any of those countries was attacked for one or another reason, all five of them would have to join the war. So even if the direct cause of the war was different than the assassination, all of those countries would have been in war. The First World War was inevitable. Even if the Archduke was not assassinated, the imperialism, desire for power and alliance system would have caused the war anyway. It was just a matter of time, before some of the countries declared war on another one. The assassination just sped up the course of actions, and led to the first Great War in the World History. ...read more.