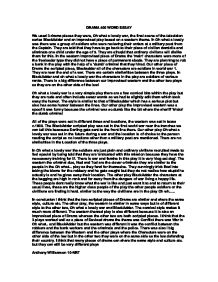 We used 3 drama pieces they were, Oh what a lovely war, the final scene of the television series BlackAdder and an improvised play based on a western theme.

DRAMA 500 WORD ESSAY We used 3 drama pieces they were, Oh what a lovely war, the final scene of the television series BlackAdder and an improvised play based on a western theme. In Oh what a lovely wae there was a group of soldiers who were recieving their orders at a military post from the Captain. They are told that they have to go back to their place of civilian domicile and eliminate one child under the age of 5. They are afraqid that ordinary civilians will dislike them for this. In the western improvised piece of Drama the 'main' characters were more of the freeloader type they did not have a place of permanent abode. They are planning to rob a bank in the play with the help of a 'dumb' criminal that they hired. ...read more.

The BlackAdder scripted play was set in the first world war near the trenches we can tell this beacause Darling gets sent to the front line there. Our other play Oh what a lovely war was set in the future during a war and the location is of choice to the person reading the script as no locations other than a military post are mentioned. There are no similarities in the Location of the three plays. In Oh what a lovely war the soldiers are just plain and ordinary civilians recruited made to feel special by being told that they are 'entrusted with this mission because they have the neccessary training for it'. There is war and famine in this play it is very 'dog eat dog'. The western the criminal duo, Nod and Tod are the clever criminals they are similar to the people in the Oh what... ...read more.

The other play, the western is similar in some ways but is of different style to the other two, Oh what a lovely war and BlackAdder. The comical style makes it much more different. The western themed play is also different because it is also an improvised piece of Drama whereas the other two are both scripted pieces. I think that the 3 plays worked well as a piece of Devised drama the theme was Conflict there was War in Oh what.. and BlackAdder but the western was different it was the conflict between the robbers and the bank workers and the criminals and the police. There was also i big difference between the Western and the other plays where the Characters were on the other side of the law but in the other two they were on the same side as the law defending their country. I think that many pieces of drama can share the same style and culture etc. but they can still be very different plays Anthony Williamson 10-NRT ...read more.