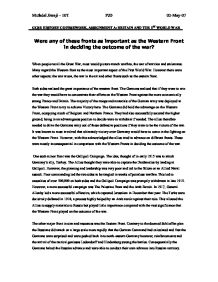 Were any of these fronts as important as the Western Front in deciding the outcome of the war?

GCSE HISTORY COURSEWORK, ASSIGNMENT A: BRITAIN AND THE 1ST WORLD WAR Were any of these fronts as important as the Western Front in deciding the outcome of the war? When people recall the Great War, most would picture trench warfare, the war of attrition and stalemates. Many regard the Western front as the most important aspect of the First World War. However there were other aspects: the war at sea, the war in the air and other fronts such as the eastern front. Both sides realised the great importance of the western front. The Germans realised that if they were to win the war they would have to concentrate their efforts on the Western Front against the more economically strong France and Britain. The majority of the troops and materials of the German army was deployed at the Western Front to try to achieve Victory here. The Germans did hold the advantage on the Western Front, occupying much of Belgium and Northern France. They had also successfully secured the higher ground, being in an advantageous position to decide were to withdraw if needed. ...read more.

surprised and were pushed back into north-eastern Germany however, reinforcements and the arrival of the tactical geniuses Ludendorff and Hindenburg swung the battles. Consequentially the Germans halted the Russian advance and were able to conduct their own advance into Russian territory. Sooner rather than later, the Russians pulled out of the war and therefore played little role in the outcome of the war. It is therefore I dismiss the Eastern front as having any relative importance on the outcome of the war the role it did play, if any, was vastly eclipsed by events further west. The war in the air was highly regarded as a very important part of the war, used to support land and sea forces. The reconnaissance ability of aircraft allowed vastly improved fighting tactics. The fighter aces that were created also played a large role in helping morale on both sides. Planes helped artillery locate enemy forces, and to fire upon them, and to avoid artillery fire for their side. ...read more.

However, it only helped. The convoy system kept Britain fed and supplied with materials during the war. Big fighting ships would escort merchant vessels through the Atlantic. This allowed Britain to be well fed throughout the war. The War at Sea did play a large role on the outcome of the war, larger than the role played by the War in the Air. However, overall the naval efforts were eclipsed by events further south. Victory and defeat would be decided on terra firma, in the muddy trenches of Belgium and France, not the icy waves of the North and Baltic seas. It is clear that the war would be won and lost on the Western Front. No other 'front' would be as important as the Western front. The final victory was not until 1918, when the Allies broke the German line on the Western Front. In summate; obviously, the majority of the fighting that occurred in the Great War took place on the Western Front. This was with good reason as both sides understood the importance of the Western Front; far more important than any other aspect of the war. Mufadal Jiwaji - 10T PJD 02-May-07 ...read more.