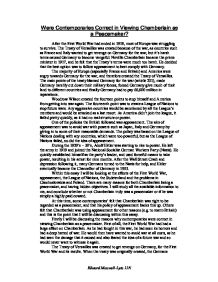 Were Contemporaries Correct in Viewing Chamberlain as a Peacemaker?

Were Contemporaries Correct in Viewing Chamberlain as a Peacemaker? After the First World War had ended in 1918, most of Europe was struggling to survive. The Treaty of Versailles was created because of the war, as countries such as France and Italy wanted to get revenge on Germany for the war, but it's harsh terms caused Germany to become vengeful. Neville Chamberlain became the prime minister in 1917, and he felt that the Treaty's terms were much too harsh. He decided that the best option was to follow appeasement to best comply with Germany. The majority of Europe (especially France and Britain) and America were angry towards Germany for the war, and therefore created the Treaty of Versailles. The main points of the treaty blamed Germany for the war (article 231), made Germany harshly cut down their military forces, forced Germany give much of their land to different countries and finally Germany had to pay �6,600 million in reparations. Woodrow Wilson created the fourteen points to stop himself and America from getting into war again. The fourteenth point was to create a League of Nations to stop future wars. Any aggressive countries would be sanctioned by all the League's members and would be attacked as a last resort. As America didn't join the league, it failed pretty quickly, as it had no real structure or power. One of the policies the British followed was appeasement. The aim of appeasement was to avoid war with powers such as Japan, Italy and Germany by giving in to some of their reasonable demands. The policy was based on the League of Nations dealing with any countries, which were too powerful, but as the League of Nations failed, so did the idea of appeasement. ...read more.

He and Britain weren't ready for a war, and appeasement seemed to be the only current way to avoid a war. Previous Prime Ministers had followed the policy of appeasement, and they had become successful politicians. When Hitler marched troops into the Rhineland in 1936, no one tried to stop Germany at all, as they all felt that Germany should have the Rhineland, as it had been theirs originally. This proves how desperate Britain was to avoid war, and that they would go to huge lengths to stop war. This was obviously the route Chamberlain was meant to take. The activities that took place in the Sudetenland in 1938 proved that Chamberlain was serious about his policy of appeasement. When Hitler demanded the Sudetenland from Czechoslovakia, Chamberlain soon agreed to this idea. He felt that if Germany were given the Sudetenland, they wouldn't make any more aggressive moves, and therefore not want to start a war. Chamberlain flew to Germany and met up with Hitler on three separate occasions, once in Berchtesgaden (15th September 1938), once in Godesberga (22nd September 1938) and finally in Munich (28th - 30th September 1938). Hitler made the point that the Sudetenland had three million German speaking people in it, who would much rather be part of Germany than Czechoslovakia. Chamberlain agreed, and gave the Sudetenland to Germany. On the 30th of September, Chamberlain and Hitler signed the 'scrap of paper', which stated that Britain and Germany would never go to war with each other. Chamberlain is a peacemaker here because he is giving land to countries that are demanding it. He seemed to desperately avoid war, as he thought another war would surely destroy Europe, due to the advancement in weaponry and military points. ...read more.

The above source shows the military spending as a percentage of the government spending. It clearly shows that Chamberlain is rearming. Even though Germany is rearming at a much larger rate, Britain is still preparing for a war, which it knows is going to happen. If Chamberlain knew that war would occur, why did he keep giving Germany land, which still led to war? It was because he was a coward who thought he could buy himself and Britain out of any situation. Unfortunately, his plan backfired and he ended up giving Germany much land, sacrificing countries, and having many innocents killed, just so that World War 2 would start later rather than sooner. This is not the action of a peacemaker. After having looked at and analysing the information given to me, I have decided that Chamberlain was a peacemaker, up to a certain point when he just gave in to anything. He was genuinely trying to stop war as he had been in the First World War and had seen its horrors. The British people also did not want war, and so were pressurising Chamberlain to avoid it. And at this time, Britain was unable to afford to rearm due to economic pressure. But the majority of these reasons are hardly to do with Chamberlain personally, as they had been forced upon him. In 1939 Chamberlain had given the Sudetenland to Hitler, this gave Hitler more confidence to attack more countries and to spread out further. When Hitler took Czechoslovakia, Chamberlain used the excuse that he didn't know the Czechs well enough, to need to do anything. This was cowardliness at work. Chamberlain even went to the extreme of declaring war on Germany, a true peacemaker would not have done, or even considered, this. Overall, Chamberlain was just being a coward, and does not deserve to be remembered as a peacemaker. Edward Maxwell-Lyte 11N ...read more.