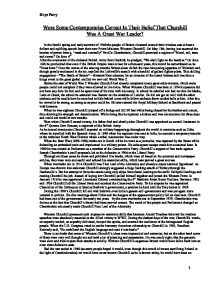 Were Some Contemporaries Correct In Their Belief That Churchill Was A Great War Leader?

Were Some Contemporaries Correct In Their Belief That Churchill Was A Great War Leader? In the fateful spring and early summer of 1940 the people of Britain clustered around their wireless sets to hear a defiant and uplifting speech from their new Prime Minister, Winston Churchill. On May 13th, having just assumed the burden of power from a, "weak and cowardly" Neville Chamberlain, Churchill promised a regime of "blood, toil, tears and sweat." On June 4th After the evacuation of the defeated British Army from Dunkirk, he pledged, "We shall fight on the beaches." On June 18th he proclaimed that even if the British Empire were to last for a thousand years, this would be remembered as its "finest hour." Over the course of the ensuing months Britain alone defied the vast conquering appetites of Hitlerism and, though greatly outclassed in the air, repelled the Luftwaffe's assault with a handful of gallant fighter pilots. This chilling engagement-"The Battle of Britain"-thwarted Nazi schemes for an invasion of the island fortress and was thus a hinge event in the great global conflict we now call World War II. Before the start of World War II Winston Churchill had already completed many great achievements, which some people could not complete if they were allowed to live twice. When Winston Churchill was born in 1874 his parents did not have any time for him and he spent most of his time with his nanny. In school he rebelled and had no time for Maths, Latin or Greek, the school he attended was Harrow on the outskirts of London. He did not get on well with the other students and he recalls how he once had to hide behind a tree while fellow students threw cricket balls at him. After this he vowed to be strong, as strong as anyone could be. He later entered the Royal Military School at Sandhurst and passed with honours. ...read more.

He then goes on to say that it is Churchill's fault for not being able to distinguish the difference between a practical, well thought out idea, to an idea that was completely imperceptive. This is suggesting he cannot distinguish the difference between a good or bad idea, which once again is incorrect and is used to make him appear a man who leaves everything to his Generals. Charmley always tried to create an image of Churchill as a man who had no idea of what he was doing, which is untrue as he alone inspired and led millions of men not only to death, but also to victory, something Chamberlain or other political leaders could not have done. Chamberlain had the ideal idea of peace and love where Churchill knew war was the only way forward, showing his vast experience over Chamberlain and Charmley's ridiculous comments. Charmley although criticizing makes a few good points against Churchill's ideas and plans, "At this stage of the war Churchill grossly overestimated what could be achieved by sea power. It was Churchill who fixed upon the Narvik as the object of the Allied campaign. The Norwegian campaign was flawed in concept and muddled in execution. The command structures might have been designed to result in chaos." Charmley here outlines the flaws in Churchill's plan, he tells us that the plan was overestimated and badly structured and that Churchill's campaign had flaws in it from the beginning, showing that Churchill's ideas were not all good ones and he was not always the great leader people said he was. Charmley then describes the 'End Of Glory' celebrations, "Pursuing the slogan 'Victory at all costs', Churchill was casually indifferent to what the costs might be." "Churchill stood for the British empire, for British independence and for an anti-socialist vision of Britain. By July 1945 the first of these was on the skids, the second was dependent solely on America and the third had just vanished in a Labour victory." ...read more.

Some of the quotes Charmley's used were very biased against Churchill and seemed only to focus on the bad points of his career to make him seem a lesser individual. Irvine and Ponting both displayed good reliable points, showing his weaknesses and strengths. I can not call the contemporaries wrong because they do give crucial points, but also none of them actually say whether he was a good or bad leader, leaving the answer open for you to decide, but they do try and influence the way in which you answer. I would say the contemporaries were right in their opinions but everybody including the Historians had different views. Historians are more likely to be critical of Churchill than the people at that time as they were just happy to have won the war and read of his exploits in the newspapers. He to them saved their lives and they considered they owed him a great debt. Historians were not there and did not know the pressures he was under. They criticize him because people say he was a great leader and they try to put him down and show his flaws not just the good points. They show the public the truth about what happened, and what people of the time blanked out, due to victory and patriotism. Here are advantages and disadvantages of Churchill's contemporaries and Historians: Advantages - Censorship, morale, newspapers, and victories. The need to believe in their leader. Disadvantages- Narvik campaign, ignored advisors, unworkable ideas, knew about bombings of places such as Coventry, USA took advantage of GB in lend lease agreement. If you notice the advantages are from or to people at the time. Disadvantages are from the historians. I think if you look closely enough into Churchill's campaign you will find flaws, but nobody is perfect both the Contemporaries and the Historians have every right to question this but never should they say he was a bad leader, as he got them through and helped win the war, something no one else dared do. This Was Our Finest Hour Rhys Parry 1 ...read more.