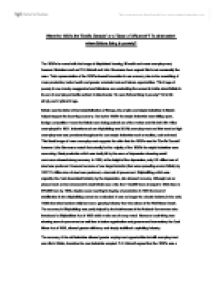 Were the 1930's the Devils Decade or The Dawn of Affluence?

Were the 1930's the "Devil's Decade" or a "Dawn of Affluence"? To what extent where Britons living in poverty? The 1930's is marred with the image of dilapidated housing, ill health and mass unemployment, however historians such as D.H Aldcroft and John Stevenson have argued this is not necessarily the case. Their representation of the 1930's showed innovation in our economy due to the unearthing of mass production, better health and greater entertainment and leisure opportunities. This image of poverty is one merely exaggerated and historians are overlooking the economic truths about Britain in favour of unemployed textile workers in Manchester. So were Britons living in poverty? Or is this simply and mythical image. Britain was the father of the industrialisation of Europe, the empire and staple industries in Britain helped support the booming economy. But by the 1930's the staple industries were falling apart, foreign competition meant that Britain were being pushed out of the market and this left 2.64 million unemployed in 1931. Industries such as shipbuilding saw 30.6% unemployment and this trend on high unemployment was prevalent throughout the core staple industries such as textiles, coal and steel. ...read more.

Furthermore it was discovered that regions who were experiencing more hardship from the depression such as Wigan had far higher death rates then somewhere like Harrow which only had a death rate of 73 persons per 1000 (Wigan was 138 persons). Criticism was also raised over infant mortality rates, despite them dropping on a global level there were former colonies that had better health care then Britain. New Zealand only had 32 deaths for every 1000 live births whereas in Britain the statistic was 57. C.E McNally summed up the health situation with "prevention of disease was impossible unless improved housing and dietary conditions could be assured" something that would be impossible for working class families. On the other hand Britain was apparently experiencing greater housing conditions. The interwar period saw the completion of 4 million houses and by 1938 there was a housing surplus of 500,000 houses. Considering that in 1918 there were 610,000 houses fewer then families this is an admirable improvement. The National Government also finally implemented its policies of slum clearance which saw slum housing that littered inner industrial cities removed and new hospitable houses built. New high rise council estates were created as a solution to the slum housing problem which meant less land was used and there were affordable alternatives to the slum houses. ...read more.

The cinema, bingo and dance halls were all continuing to grow with 3 cinemas being open every week. The cinema was an affordable enterprise open to all classes in Britain and proved very important to social cohesion throughout the decade. Also after the 1920's dance halls were becoming very fashionable and boomed in popularity. The 1930's was a truly remarkable decade; Britain unusually saw affluence and poverty side by side. Although arguably the idea of affluence and poverty in Britain isn't unusual, it was only because of Seebohlm Rowntree, the Cole brothers, Tout, John Boyd Orr and other social investigators that people actually take notice of the poverty in the 1930's. One finds confusing that people label the 1930's as devilish because the working classes abject poverty. I have to raise the question though, when were the working class not in poverty? For century's industrial workers of Manchester, York, Newcastle had been underpaid and endured inhumane conditions. Personally I feel that the 1930's simply highlighted the social problems of Britain which had gone unnoticed for decades. It was neither a dawn of affluence nor a devils decade. Despite economic statistics begging to differ, the thorough social investigations dismiss this concept; statistics cannot speak louder than accounted human suffering. Britain in the 1930's was laced with unemployment, malnutrition and reckless appeasement, but then we also saw cars and pencillin. ...read more.