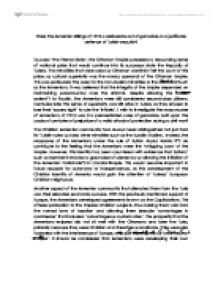 Were the Armenian killings of 1915 a deliberate act of genocide or a justifiable defence of Turkish security?

Were the Armenian killings of 1915 a deliberate act of genocide or a justifiable defence of Turkish security? Dubbed 'the Eternal State', the Ottoman Empire possessed a resounding sense of national pride that would continue into its successor state the Republic of Turkey. The minorities that were ruled by Ottoman dominion felt the brunt of this pride, as cultural superiority was the modus operandi of the Ottoman Empire. This was particularly the case for the non-Muslim minorities or the dhimmi such as the Armenians. It was believed that the integrity of the Empire depended on maintaining paramountcy over the dhimmi. Despite allowing the millet system*1 to flourish, the Armenians were still considered second-class citizens. Centuries later the sense of superiority was still alive in Turkey as they refused to lose their 'sacred right' to rule the 'infidels'. I wish to investigate the mass murder of Armenians of 1915; was it a premeditated case of genocide built upon the backs of centuries of prejudice of a valid attack of protection during a civil war? The Christian Armenian community had always been distinguished not just from its' Turkish rulers but also other minorities such as the Kurdish Muslims. Indeed, the massacres of the Armenians under the rule of Sultan Abdul Hamid II*2 do contribute to the feeling that the Armenians were the 'whipping boys' of the Empire. However, this identity has been countered with evidence that Sultans' such as Mehmet II showed a great deal of clemency by allowing the initiation of the Armenian Patrichate*3 in Constantinople. ...read more.

In fact, the Adana massacre*9 which resulted in 'fifteen to thirty thousand Armenians,' being killed demonstrated that decades after the Hamidian massacres the feelings of resentment towards the Armenian people still existed. However, Guenter Lewy claims that the destabilization of the regime was mostly to blame for this, as the Armenians had more openly opposed Abdul Hamid II. Therefore, it was easy for the Turkish citizens to pinpoint the blame upon the Armenians. Lewy claims that the massacre was one of civilian proportions and estimates the death rate to be lower that fifteen thousand. However, the presence of the military must be considered especially when acknowledging the length of the massacre: a mere 10 days. Therefore, it could be said the estimated death rate from both Lewys and Akcams could not have been achieved without military organisation. It was not long after their journey into power that the attitude and policies towards the Armenians began to radicalize. To quote Taner Akcam, 'It is widely acknowledged that war creates a favourable climate for genocide'. It is no coincidence that the killings occurred during World War One were the new Republic of Turkey joined the Axis powers*. In a time of increased political and economic instability and after Ismail Enver openly laid the responsibility of the defeat of the Battle of Sarikamis* on the Armenians. It is no stretch of the imagination that this increased the hostility towards the Armenians. Already having been alienated from Turkish society as a result of their religion and their prosperity, they were 'scapegoats'* for the failing Turkish republic. ...read more.

Yet, Weems book has been labelled psuedohistorical and anti-Armenian. Indeed, the chances that the Armenians were consideirng a rebellion could be seen as slim as the German Ambassador for Turkey, Hans Freiherr von Wangenheim, claimed that "that the Armenians have given up their ideas of a revolution since the introduction of the Constitution and that there is no organization for such a revolt". When the killings of Van came to pass around 55,000* citizens were killed. In his research Richard Hovannisian points out that only 1,500* Armenian soldiers fought. The next phase of the killings came in French when Mehmet Talat Pasha appealed for the legalisation of the 'Temporary Law of Deportation', referred to in Turkish as the 'Tehcir' Law. He asked the Gand Vizier Said Hailm Pasha and Turkish cabinet for the right to deport Armenians in response to 'the Armenian riots and massacres, which had arisen in a number of places in the country.' It should be noted that even among the recognized scholars who reject the theory of genocide, such as Bernard Lewis and Guenter Lewy, no evidence has been found of a united Armenian paramilitary resistance that threatened the Republic of Turkey. The implementation of the deportation was described by Theodore Roosevelt as "the greatest crime of the war." The deportees were marched into the Syrian Desert and were left with no means of survival. It is the act of deportation and its cruelty that has been the deciding point for a great number of historians. The historian Christopher J. Walker describes how many of the Armenians died from starvation. Eitan Belkind, a Jewish spy described how many were killed by 'mass-burning, poisoning and mass drowning' ...read more.