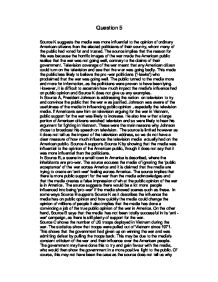 Were the media successful in manipulating the public's opinion of the war?

Question 5 Source K suggests the media was more influential to the opinion of ordinary American citizens than the elected politicians of their country, whom many of the public had voted for and trusted. The source implies that the reason for this was because the horrific images of the war made the American public realise that the war was not going well, contrary to the claims of their government. Television coverage of the war meant that any American citizen could turn on the television and see that the war was going badly. This made the public less likely to believe the pro-war politicians ('Hawks') who proclaimed that the war was going well. The public turned to the media more and more for information, as the politicians were proven to have been lying. However, it is difficult to ascertain how much impact the media's influence had on public opinion and Source K does not give us any examples. In Source A, President Johnson is addressing the nation on television to try and convince the public that the war was justified. Johnson was aware of the usefulness of the media in influencing public opinion, especially the television media. ...read more.

Source C shows the number of US troops deployed in Vietnam during the war. The statistics show that troops were pulled out of Vietnam since 1971. This shows that the government had given up on winning the war and was admitting defeat by pulling the troops back. This may be due to the media's constant criticism of the war and their influence over the American people. The government may have done this to try and gain favour with the media, who would then show the government in a more positive light to the public. Of course, this may not have been the case as the source does not tell us why the troops were withdrawn from Vietnam but if this is the reason then it adds weight to Source K's claim. Source E is a cartoon making fun of America's foreign policy with regard to Vietnam. This source shows that without censorship, even the most important people in the world can be ridiculed by the media. The source may be trying to influence the public against the war but that is unlikely as it is published after American involvement in the war has ended and also it seems to be more of a satire aiming to be humourous than an actual serious assault on the American government. ...read more.

This would have been very damaging to the government as this incident must have influenced the viewers watching at home against the government and the war. This is also captured by the television media and its images again show condemnation of the war. However, we have to question the motives of the media. The soldier was interviewed while he was reloading his rifle. The producers must have known that the soldier would be in an emotional mood at that time and not in the right frame of mind to answer questions. Due to this, we must question the source's reliability and assume that this was not representative of the soldiers as a whole. The media wanted to show war in this way to shock the viewers and gain support for its 'anti-war' campaign. The sources do not give a clear answer to the question. Most of the sources are not completely reliable and only give a partial answer to the question. We must take into account that many factors other than the media contributed to the public antipathy towards the war, so evidence that American citizens were against the war does not automatically mean that the media were successful in manipulating the public's opinion of the war ...read more.