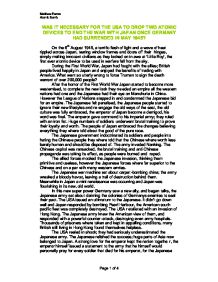 Were two atomic devices required to end the war with Japan?

WAS IT NECESSARY FOR THE USA TO DROP TWO ATOMIC DEVICES TO END THE WAR WITH JAPAN ONCE GERMANY HAD SURRENDED IN MAY 1945? On the 6th August 1945, a terrific flash of light and a wave of heat rippled across Japan, tearing window frames and doors off their hinges, simply melting innocent civilians as they looked on in awe at 'Little Boy', the first ever atomic device to be used in warfare fell from the sky. During the First World War, Japan had fought with the allies; British people lived happily in Japan and enjoyed the benefits of trading with America. What went so utterly wrong to force Truman to sign the death warrant of over 200,000 people? After the horror of the First World War Japan started to become more westernised, to complete the new look they needed an empire all the western nations had one and the Japanese had their eye on Manchuria in China. However the League of Nations stepped in and condemned the Japanese bid for an empire. The Japanese felt penalised, the Japanese people started to ignore their new lifestyles and re-engage the old ways of the east, the old culture was fully embraced, the emperor of Japan become a demigod, his word was final. The emperor gave command to his imperial army; they ruled with an iron fist. ...read more.

The reasons for dropping the bombs can be split into two sections, winning the war and beating Japan and secondly, seeking revenge or justice for the atrocities suffered by America up to this point. Firstly winning the war. The first point to consider is the mindset of the Japanese people their Prime Minister Suzuki issued this statement as the Americans where invading. "I expect the 100,000,000 people of the glorious empire to join themselves into a shield to protect the emperor and the imperial land from the invader." Statements like these prove the Japanese people were not prepared to give up at any cost. In addition to the civilians of Japan the millions of Japanese soldiers where willing to fight to the death for there beloved emperor and the thousands of pilots were also prepared to give their lives to become kamikazes, to an American negotiations with a people as blinkered and brutal as these were simply not possible. Food production and distribution came second to the inhabitants of Japan the defence of the islands was paramount above everything. Further proof that a peace treaty was out of the question. So with the option of truce completely removed the next step is conventional attack similar to the ones already used and those used by the allies to reclaim Europe. However, prior to the drop of the bomb these attacks had proved useless, to stage an all out attack would have cost somewhere around 900,000 American lives. ...read more.

Many Japanese officials said they already defeated and a treaty was currently in discussion when the bombs where dropped. Many people also believe the Japanese where not given enough time to respond to the first atomic bomb before the second was dropped. These points are mostly valid and where almost defiantly taken into account before the decision was made. In conclusion I believe that the dropping of the atomic devices on Hiroshima and Nagasaki where both necessary and justified to end the war with Japan. If they had not have been used we would still be waiting for them to be used which, in my opinion is far more frightening then knowing they have been used, at least we can be almost certain they will not be used again without severe reason. If the Americans had tried for a treaty or conventional attack the war could have dragged on for another year, another ten years it could still be going on today, resulting it the completely unnecessary loss of lives. "If the bomb kills Japanese and saves casualties on our side I am naturally not going to favour the killing of our people unnecessarily...war is crazy. It is a crazy thing that we are fighting at all. But it would be even more crazy if we were to have more casualties on our side to save the Japanese." Admiral lord Louis Mountbatten, Allied Supreme Commander Southeast Asia 1945. ?? ?? ?? ?? Matthew Farren Atomic Bomb Page 1 of 4 ...read more.