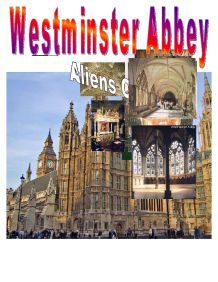 Write a guide for the use of a visitor from another planet. Religions such as Christianity often feel the need to erect great monuments to worship their God(s). Westminster Abbey is one of the most famous churches in Britain, ranked along with St Paul's and Winchester. England has been a Christian country for one and a half thousand years, since its days as part of the Roman Empire, which in its day spanned all of Europe and most of North Africa. In Christianity's case, a large part of their worship resides in the crucifix, a Roman form of torture and death, a cross on which people were nailed to and left to die. Due to a dislike of his wife, a particular fondness for one of his wife's ladies and such matters being greatly frowned upon by the Catholic Church (the only form of Christianity at the time), King Henry VIII created his own church to give him a divorce: The Protestant Church, also sacking all of the catholic churches and abbeys in the process. This became known as the Reformation. The British rulers have, until a few centuries ago, forced their beliefs upon the country, sometimes to horrific effect. ...read more.

These ornate chambers are dedicated to many men who were at the forefront of British Christianity in their time. St Edward the Confessor has his own chapel around the corner. His first shrine was built in 1163, soon after his canonisation. It was when Henry III rebuilt the abbey that he hired Italian craftsmen (under Peter the Roman) to build the current chapel and shrine. Since the Reformation the beautiful shrine was dismantled, the golden reliquary stolen by Henry VIII's troops. The remnants were re-assembled in the reign of his daughter, Mary I. Surrounding this are the tombs of all monarchs from Henry III to Henry V. Just outside is the coronation chair, kept here since Elizabeth II's coronation. 3. Up the stairs and to the left is the chapel of Queen Elizabeth, arguably the Abbey's most generous benefactor. Her marble tomb is huge, with a full length statuette of her covered by a carved canopy. Her half-sister, Mary I, is buried underneath Elizabeth. 4. Then we go up to wonderful The Lady Chapel. Its brilliant fan-vault ceiling is truly amazing (from my description you might be able to tell what I think of it). ...read more.

It later became a store room for the royal treasury in the 13th century, but it was burgled in 1303 and the Abbot and several other monks were confined to the Tower of London (a royal prison used only for high-profile criminals/political prisoners. It has an incredibly bloody past) but were later released. The doors became fortified, changed for oak and with steel bars running across to reinforce it. The room is named after the wooden boxes which contained the coins from which were to be tested for purity and the quantity of silver/gold. 9. After walking along the South and West Cloisters, around the peaceful garden, you enter the nave, the west side of the church. Here are many more memorials, the so called Scientists' Corner commemorating many great minds: Darwin, Newton, Livingstone and Purcell. Probably the most famous grave there is that of the Unknown Warrior. To remember all the thousands, millions, of unburied soldiers who died in the WW1 a nameless soldier was brought across from France in the HMS Verdun to be buried in among the great of Britain. So we come to the end of our tour. We at Westminster hope that you enjoyed your visit. ...read more.