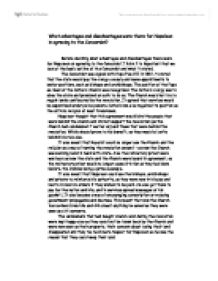 What advantages and disadvantages were there for Napoleon in agreeing to the Concordat?

What advantages and disadvantages were there for Napoleon in agreeing to the Concordat? Before deciding what advantages and disadvantages there were for Napoleon on agreeing to the Concordat I think it is important that we look at the basic outline of the Concordat and what it stated. The Concordat was signed with Pope Pius VII in 1801, it stated that the state would pay the clergy a salary and make appointments to senior positions, such as bishops and archbishops. The position of the Pope as Head of the Catholic Church was recognized. The Catholic clergy was to obey the state and promised an oath to do so. The Church would not try to regain lands confiscated by the revolution. It agreed that services would be supervised under police powers. Catholicism also regained its position as the official religion of most Frenchmen. Napoleon thought that this agreement would bind the people that were behind the church and did not support the revolution (as the Church had condemned it earlier on) and those that were behind the revolution. ...read more.

All this meant that loyalty for Napoleon was guaranteed. Every parish priest told his "flock" to be loyal to Napoleon. It was also seen as a Christian's duty to obey Napoleon. If God was respected and honored, then so was Napoleon. This meant that loyalty for Napoleon had grown, also opposition to him should have been reduced as it bound the people together in a way, he made changes that were to make people see him as the new and fairer leader. However Napoleon managed to create many disadvantages of this action too when he overstepped the mark and made himself a saint, August 16 became St. Napoleon day, replacing the original festival of the Assumption of the Virgin. Many Christian's saw this as Napoleon's way to be seen equal to God - especially since this angered the Pope. Some argued that the Concordat had never been fully loyal to him, they never accepted themselves a civil servants. Many remained stubbornly royalist and started to regain the lost church lands. Napoleon had started facing new opposition in the form of most of the clergy, especially as the Pope wasn't very happy. ...read more.

and punishment (1810), was the product of a committee of legal experts, whose work was considered in over a hundred sessions of the Council of State, often chaired by Napoleon personally. The code while enshrining many of the achievements of the revolution, it included a number of illiberal measures. On one hand, it confirmed the abolition of feudalism, equality before law and freedom of the conscience, and gave a fixed title to those who had bought church and �migr� lands during the 1790's. On the other, it reintroduced slavery to the French colonies, gave employers the upper hand in wage disputes and compelled workers to carry a passbook or livret, effectively limiting their freedom of movement. It also reflected Napoleon's views about the insubordinate position of women and children. Whilst a man could imprison an adulterous wife or disobedient child, a married woman had few property rights and could only sue for divorce if a husband insisted that the mistress share their home. What evidence can you find to support the view that Napoleonic government was highly centralised and authoritarian? It is quite clear that Napoleonic government was highly centralised and authoritarian, this is shown by the absence of freedom of speech ...read more.