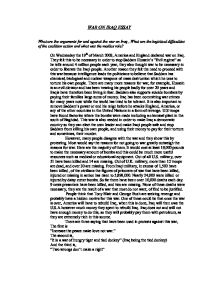 What are the arguments for and against the war on Iraq, What are the logistical difficulties of the coalition action and what was the medias role?

WAR ON IRAQ ESSAY What are the arguments for and against the war on Iraq, What are the logistical difficulties of the coalition action and what was the medias role? On Wednesday the 19th of March 2003, America and England declared war on Iraq. They felt this to be necessary in order to stop Saddam Hussein's "Evil regime" as he tells around 4 million people each year, they also thought war to be necessary in order to liberate the Iraqi people. Another reason they felt the need to proceed with this war because intelligence leads the politicians to believe that Saddam has chemical, biological and nuclear weapons of mass destruction which he uses to torture his own people. There are many more reasons for war, for example, Hussein is an evil dictator and has been treating his people badly for over 20 years and Iraqis have therefore been living in fear. Saddam also supports suicide bombers by paying their families large sums of money. Iraq has been committing war crimes for many years now while the world has tried to be tolerant. ...read more.

For example one Iraqi man has lost eleven members of his family. Many children are malnourished and without families. Also, the body of an Iraqi baby was found on a main street and U.S troops give baby Muslims burials. For the few babies born since the war began, thousands have been killed. One particular boy called Ali Abbas was at home when a bomb went of very near by, his parents and both of his brothers were killed, he himself was left without arms., Ali has become a bit of an icon of the suffering of Iraqis as he is one of thousands of children who have been injured and/or orphaned. Some disagree because it goes against general convention, the U.N did not want the war, and it goes against the rules of religion. Also they do not think that families should have been destroyed, due to the harm caused by some of the 2,000 lb TNT's or daisy cutter bombs, which have already killed over 24,000 people. Many people see it to be unnecessary for the U.S to have done some of the things they have, for example, they have bombed radio and TV stations in order to stop bias opinions being broadcast. ...read more.

"The sun" has supported the war from the get go. They have, on the contrary of the other two papers, made frequent positive remarks and reports on the war, and have made excuses for any negative stories. Apart from the three newspapers that I have mentioned above , all the other have been very unbiased and seemingly quite honest. Many program timetables have been altered to broadcast as much up-to-date information as frequently as possible. The radio have allocated four different radio stations to broadcast 24hour reports in Arabic, for the first two, and the other two are in English. Finally music channels like MTV have banned all songs and videos that contain anything war related such as Madonna's song 'American life' The media reports in Iraq have been minimal as the Americans destroyed the broadcasting building in an attempt to stop biased reports. I believe that this war is wrong because it is not a war of religions, beliefs or truth as we would be led to believe, but a war of politics, and limbs, lives and families should not be hurt, destroyed or lo0st, for politics. ...read more.