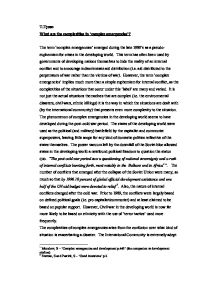 What are the complexities in 'complex emergencies'?

T.Tyson What are the complexities in 'complex emergencies'? The term 'complex emergencies' emerged during the late 1980's as a pseudo-euphemism for crises in the developing world. This term has often been used by governments of developing nations themselves to hide the reality of an internal conflict and to encourage indiscriminate aid distribution (i.e. aid distributed to the perpetrators of war rather than the victims of war). However, the term 'complex emergencies' implies much more than a simple euphemism for internal conflict, as the complexities of the situations that occur under this 'label' are many and varied. It is not just the actual situations themselves that are complex (i.e. the environmental disasters, civil wars, ethnic killings) it is the way in which the situations are dealt with (by the international community) that presents even more complexity to the situation. The phenomenon of complex emergencies in the developing world seems to have developed during the post-cold war period. The states of the developing world were used as the political (and military) battlefield by the capitalist and communist superpowers, leaving little scope for any kind of domestic politics reflective of the states themselves. The power vacuum left by the downfall of the Soviet bloc allowed states in the developing world a newfound political freedom to question the status quo. "The post cold war period saw a questioning of national sovereignty and a rash of internal conflicts bursting forth, most notably in the Balkans and in Africa1". The number of conflicts that emerged after the collapse of the Soviet Union were many, so much so that by 1996 10 percent of global official development assistance and one half of the UN aid budget were devoted to relief2. ...read more.

"The tendency among donors and within international organisations to treat "conflict" and "postconflict" as separate categories and distinct phases in a quest for "lasting peace" has carried with it the expectation (and planning assumption) that the formal end of armed hostilities also marks a definitive break with past patterns of violence10". The International Community has also adopted a stance of 'State-Centrism' whereby negotiations are principally conducted with the recognised, formal apparatus of the state. This ignores potential spheres of influence that may operate within the nation (such as rebel groups, warlords) and further exacerbate the situation of war. This is no more apparent than in Rwanda, where negotiations prior to the genocide were conducted chiefly with the Hutu government. It has now become apparent that within that government were the main planners of the genocide, yet the International Communities obsessive dedication to 'peace at all costs' and the narrow focus of negotiation with the 'formal' government lead to a disastrous ignorance of the genuine issues. The devastating effects of complex emergencies are multiplied by the vulnerability of the populations of developing countries. Poor infrastructure, the legacy of war, drought, famine and other 'natural' disasters serve to undermine the ability of people in the developing world. These factors not only make the devastating effects of complex emergencies worse, but they also make recovery far harder. Under such conditions (particularly war) relief work is made far more complex. What has emerged from the practise of International Development is that the agencies operating in countries under a state of complex emergency have been separating 'Relief' and 'Development' into two distinct processes. ...read more.

The complexities in complex emergencies vary greatly, and new facets of complexity are emerging constantly. This is perhaps the most problematic aspect of complex emergencies. As new factors emerge (AIDS, terrorism, environmental disaster) it becomes increasingly difficult for relief and development agencies to develop a consistent and coherent framework for dealing with complex emergencies. Complexity also comes (in no small amount) from the institutions themselves, and the debate on the benefits versus the drawbacks of humanitarian aid is largely inconclusive. However, it is clear that complex emergencies cannot be dealt with in a 'two dimensional' way; the plethora of complexity means that flexibility and a non-linear approach to relief and development seems to be essential for success in the future. 1 Munslow, B - 'Complex emergencies and development p.445' (the companion to development studies) 2 Forman, S and Patrick, S - 'Good intentions' p.2 3 Munslow, B & Brown, C - 'Complex emergencies: the institutional impasse' 4 News Article by AFP posted on December 21, 2000 - http://southsudanfriends.org/News/Drought2001.html 5 http://www.wfp.org/newsroom/in_depth/sudan_horn.html 6 Anderson, M B - 'Do No Harm' p.37 7 A Critical Review of Operation Lifeline Sudan: A Report to the Aid Agencies - http://hwproject.tufts.edu/publications/abstracts/croo.html 8 Berdal, M and Malone, D M - 'Greed and Grievance' 9 'Good intentions' p.3 10 Berdal, M & Malone, D M - 'Greed and Grievance' p.9 11 Munslow, B & Brown, C - 'Complex emergencies: the institutional impasse' 12 http://www.worldpeacefoundation.org/peaceenforcement.html 13 Munslow, B & Brown, C - 'Complex emergencies: the institutional impasse' 14 A review of Renewing the United Nations System by Erskine Childers and Brian Urquhart - http://www.ncrb.unac.org/unreform/selected/Childers-Urquhart.html 15 Refugee Studies Centre - http://www.rsc.ox.ac.uk 16 HIV/AIDS in Complex Emergencies - A Call for Action Dr Peter Piot, Executive Director, UNAIDS - http://www.who.int/disasters/repo/5876.doc ...read more.