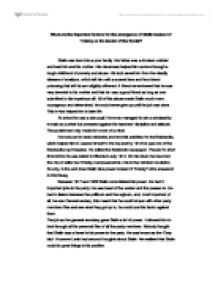 What are the important factors for the emergence of Stalin instead of Trotsky as the leader of the Soviet?

What are the important factors for the emergence of Stalin instead of Trotsky as the leader of the Soviet? Stalin was born into a poor family. His father was a drunken cobbler and beat him and his mother. His cleverness helped him survive through a tough childhood of poverty and abuse. His luck saved him from the deadly disease of smallpox, which left him with a scared face and from blood poisoning that left his arm slightly withered. A friend remembered that he was very devoted to his mother and that he was a good friend as long as one submitted to his imperious will. All of this abuse made Stalin much more courageous and determined, he would never give up until the job was done. This in-fact helped him in later life. ...read more.

The job as the general secretary gave Stalin a lot of power. It allowed him to look through all the personal files of all the party members. Nobody thought that Stalin was a threat to his power in the party. He was known as the 'Grey blur'. However Lenin had second thoughts about Stalin. He realised that Stalin could do great things in his position. Before Lenin died he wrote bad things about Stalin. He wrote about how he had enormous power in his hands. He also wrote how Stalin was organising himself around the sneaks of the party. Luckily for Stalin, he was listening in on the conversations Lenin was having about him and he knew that when Lenin died he would publish a passage about his views on Stalin. Stalin had time to act before the death. While Stalin was preparing, he knew that many Bolsheviks and peasants resented troskys promotion. ...read more.

Stalin also had the idea of embalming Lenin as at that time the pharaohs had just been discovered in Egypt. This gave Stalin a step forward as well. Stalin's opponents underestimated his power because of his supposed lack of intellect. However they did not know what Stalin had achieved during the stage when he was General secretary. He used the information that he had found out to bribe the other members of the party. In 1924, Trotsky was defeat at the 13th congress of soviet party and his fall of power was very fast. He was eventually expelled from the politburo in 1927 and eventually thrown out of Russia in 1929. After several attempts of murder, Stalin finally succeeded in murdering Trotsky in 1940 in Mexico, done by one of his agents. One by one each person of the party was either murdered or banished until Stalin became the main leader of Russia. ...read more.