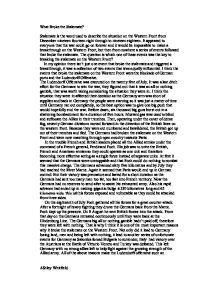 What Broke the Stalemate? Stalemate is the word used to describe the situation on the Western Front from December nineteen fourteen right through to nineteen eighteen. It appeared to everyone that the war could go on forever and it would be impossible to make a breakthrough on the Western Front, but then from nowhere a series of events followed that broke the stalemate. The question is which one of these events was the key to breaking the stalemate on the Western Front? In my opinion there isn't just one event that broke the stalemate and triggered a breakthrough, it was a collection of two events that wee equally influential. I think the events that broke the stalemate on the Western Front were the blockade of German ports and the Ludendorff Offensive. The Ludendorff Offensive was executed on the twenty first of July. It was a last ditch effort for the Germans to win the war, they figured out that it was an all or nothing gamble, that was worth taking considering the situation they were in. I think the situation they were in affected their decision as the Germany arm was short of supplies and back in Germany the people were starving so it was just a matter of ...read more.

German trade had decreased from $5.9 billion in nineteen fourteen to just $0.9 in nineteen seventeen. I think the other objective of the blockade to stop vital supplies to the German army on the front lines played an important part in the breaking of the stalemate as it meant that the Allied army always had an advantage as they could always get supplies from ports when ever they wanted, whereas Germany's supplies were restricted as they could only arrive by land from Germany and from other countries that didn't need to use the sea to deliver supplies. Although the other aspects all contributed to the stalemate being broken I believe that the most important purpose of the Blockade was to starve German civilians in to submission, as three hundred thousand deaths were related to malnutrition during 1914-18 among civilian population. Also the adults had a meat rationing equivalent to two burgers a week and at one point a third of all pigs had to be slaughtered. I think Germany found it very hard to win the war with everyone at home being starved, because morale and doubt would start to creep into the civilians minds and this made them not support the war effort and resent it. ...read more.

Even though some new weapons like tanks were invented between 1917-18 they played minimal parts in the war and so weren't important. I think overall that the weapons were a reason for the $talemate on the western front so, I can't really see how they helped to break the stalemate on the western front, and I therefore think that they are the least important factor that broke the stalemate. In conclusion I think together the Ludendorff offensive and the Blockade of Germany were equally the most important things that contributed to breaking the stalemate on the western front. This is because they together forced Germany in to making rash decisions that they wouldn't of otherwise. Also they made Germany scared which made them as a nation weaker and thus easier to defeat. I think then that America joining the war helped the most next as without them the allies would have been short of soldiers after Russia's departure, which would have put the allies on the defensive. I think that the new technology and weapons were the least important things that helped to break the stalemate as they helped to cause the stalemate as they were so defensive in the way in which they could be used. A$hley Whitfield ...read more.