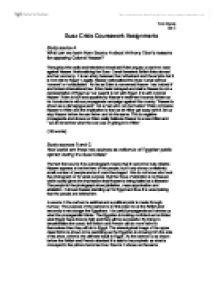 What can we learn from Source A about Anthony Eden's reasons for opposing Colonel Nasser?

Suez Crisis Coursework Assignments Study source A What can we learn from Source A about Anthony Eden's reasons for opposing Colonel Nasser? Throughout the radio and television broadcast Eden argues a cast iron case against Nasser. Nationalizing the Suez Canal threatens British links abroad and her economy. It is an artery between the motherland and the empire but it is 'not vital to Egypt.' Legally, Nasser nationalized the Suez Canal without 'consent' or 'consultation.' As far as Eden is concerned Nasser has 'seized it' and broken international law. Eden feels betrayed and claims Nasser is not a representative of Egypt as 'our quarrel is not with Egypt, it is with Colonel Nasser.' Eden is hurt and appalled by Nasser's treatment towards Britain as he 'conducted a vicious propaganda campaign against this country.' Nasser is shown as a demagogue and ' not a man who can be trusted.' Eden compares Nasser to Hitler and the implication is that we let Hitler get away with it, let us stop Nasser before he can thrive and do the same. This is negative propaganda and shows us Eden really believes Nasser is a new Hitler and ' we all remember what the cost was of giving in to Hitler.' (183 words) Study sources B and C How useful are these two sources as evidence of Egyptian public opinion during the Suez Crisis? ...read more.

Letters published in The Times in 1956 further suggest military action is not in favour, as by using 'military force over Suez' they will do so 'in defiance of very large sections of opinion in this country.' Source F believes that it is immoral to attack just because the British think Egypt will attack. It is a moral and legal objection to what is going on, as Nasser 'has made no attempt to close the Suez Canal to our shipping,' it is therefore wrong 'to threaten force by military action against Egypt.' In the emergency debate Gaitskell believes 'our Government are defying a resolution of the UN assembly.' This suggests it would be fatal to ignore UN opinion and he goes on to say that 'we represent on this issue the point of view of millions of men and women' and 'many of those persons who have hitherto voted conservative' which suggests that he is worried that many people are dissatisfied with Eden's government and wish him to 'resign.' (368 words) Study sources G and H. Does source G support Selwyn Lloyd's statement (source H) about Britain's motives for military action against Egypt? Explain your answer by referring to both sources. In source G Eden tries to justify his future actions against Nasser. He knows that Eisenhower and himself want to 'undo what Nasser has done.' ...read more.

Sources E and F show evidence of British public opinion opposing the proposed action, which suggests that some protestors realised that 'the Commonwealth did not support Britain while India supported Egypt.' Therefore by 'going it alone' with France and Israel, Britain risked 'her currency and economy' especially as 'Eisenhower was opposed to this from the start.' Source G shows Eden is having to work hard to bring Eisenhower round to the idea as Britain must have 'the maximum United States support,' in order to succeed or at least achieve anything beneficial. The fact that Britain did not receive American and UN support demonstrated that 'Britain and France could not make military interventions without US backing.' This further suggested that Britain was 'dependent on US support' and Britain would have to bow to America's will. Source H shows us that like Nasser, Selwyn Lloyd and certainly Eden believed 'his government had done what was right.' But the source does suggest that Selwyn Lloyd is not quite as cemented to his views as Eden is. Unfortunately the world did not agree with Eden and Britain subsequently looked very foolish, especially after America froze all of Britain's assets and 'forced an end to the invasion.' We can now see that from all the sources and from my background knowledge the most influential aspect of the Suez crisis was 'the fear that by incautious commitment and inflexible conservatism, Britain might again find herself isolated and friendless.' (463 words) Total word count: 1617 Tom Owens Set 2 ...read more.