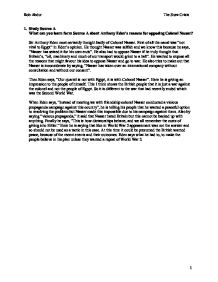 What can you learn form Source A about Anthony Eden's reasons for opposing Colonel Nasser?

1. Study Source A What can you learn form Source A about Anthony Eden's reasons for opposing Colonel Nasser? Sir Anthony Eden most certainly thought badly of Colonel Nasser. First of all the canal was "not vital to Egypt" in Eden's opinion. He thought Nasser was selfish and we know this because he says, "Nasser has seized it for his own ends". He also had to oppose Nasser if he truly thought that Britain's, "oil, machinery and much of our transport would grind to a halt". He wanted to expose all the reasons that might favour his idea to oppose Nasser and go to war. He also tries to make out that Nasser is inconsiderate by saying, "Nasser has taken over an international company without consultation and without our consent". Then Eden says, "Our quarrel is not with Egypt, it is with Colonel Nasser". Here he is giving an impression to the people of himself. This I think shows the British people that it is just a war against the colonel and not the people of Egypt. So it is different to the war that had recently ended which was the Second World War. When Eden says, "instead of meeting we with friendship colonel Nasser conducted a vicious propaganda campaign against this country", he is telling his people that he wanted a peaceful option to resolving the problem but Nasser made this impossible due to his campaign against them. Also by saying "vicious propaganda," it said that Nasser hated Britain but this cannot be backed up with anything. Finally he says, "This is how dictatorships behave, and we all remember the costs of giving into Hitler." Here he is saying that like in World War 2 appeasement was not the answer and so should not be used as a tactic in this case. At this time it could be presumed the British wanted peace, because of the recent events and their outcomes. ...read more.

First of all in Sir Anthony Eden's letter he says "I do not think that we disagree about our primary objective," but in Source H Mr Lloyd seems to believe that there is a misunderstanding in objectives. He says "there may have been mistaken judgements in carrying out our policies." Also in both sources the point I made just before this is proven because Eden and Lloyd have started two different primary objectives. Source G says the main aim is "to undo what Nasser has done and set up an international regime for the canal," whereas in Source H it says that the initial aim is "preventing a general outbreak of war in the Middle East." Eden's main objective which I have quoted above comes in Selwyn Lloyd's book too, but as the third objective. "The Suez canal had to be brought back under some kind of international control." Coincidently both men agreed that there was more than one objective. "but this is not all," is quoted from Sir Eden's letter and Source H gives three clear objectives. Many references of Hitler and his comparison to Nasser can be seen in both sources. For example Eden says that Nasser's route is "unpleasantly familiar", and also the word "menace", instantly reminds us of Hitler. In Source G Eden tries his best to make America and Britain sound united and as one country. He says he wants to, "set up an international regime for the canal, "and "a regime less hostile to the west." The phrase "international regime", and the words "the west", are used to help his thought that Eisenhower will support him if they make him feel closer to England. These words also make the letter sound more considerate towards world opinion and not selfish on Eden's behalf. On the other hand Lloyd says "national interest", which gives us a sense that Eden is thinking of personal advantages. ...read more.

This probably caused the public to think that Eden is not consulting them in any way, so as a result they went against him. The section where Mr. Lloyd says "Eden believed that his government had done what was right," is again a bad sign because if he had consulted his people on what should be done next then he would have done what was truly the right thing to do. The lack of consultation or listening is what I believe aggravated the public the most. The Suez Crisis demonstrated how much the United Nations was needed in the world. It was they who ordered the withdrawal of troops from the Suez area. I think the role which the USA and Dwight D Eisenhower took was very influential to the withdrawal of troops as well as the United Nations. The increase of oil prices and blockage of the canal caused America to apply pressure on Britain and France to stop the fighting. After the whole Suez saga, Britain is said to have dropped from its former status as a world super power. There relationship with other countries were changing for the worse and so this is why many people believe that Britain is not as influential in the world as it was 60 to 70 years ago. Finally I think that the comment "Britain was humiliated by international opinion and made to look foolish," is partly true. I wouldn't say they were made to look foolish but were humiliated because they were obliged to back down by America and the United Nations. So they were humiliated to a certain extent because their decision was over ruled and so this can be fairly shameful. I don't think that the public helped with this but it was only deserved because of Eden's neglect to his people. Finally the majority of the people from other nations disagreed with Britain's actions and so yes, international opinion was against them which obviously did cause humiliation. Rob Abdur The Suez Crisis 1 ...read more.