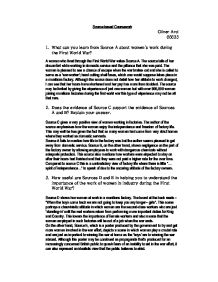 What can you learn from Source A about women's work during the First World War?

Source-based Coursework Oliver Arci 66633 1. What can you learn from Source A about women's work during the First World War? A woman who lived through the First World War writes Source A. The source tells of her discomfort while working in domestic service and the pittance that she was paid. The woman is pleased to see a chance of escape when the war brakes out and she is called to serve as a 'war-worker'; hand cutting shell fuses, which one would suppose takes place in a munitions factory. Although the source does not detail how her attitude to work changed, I can see that her hours have shortened and her pay has more than doubled. The source may be limited by giving the experience of just one woman but with over 900,000 women joining munitions factories during the first world war this type of experience may not be all that rare. 2. Does the evidence of Source C support the evidence of Sources A and B? Explain your answer. Source C gives a very positive view of women working in factories. The author of the source emphasises how the women enjoy the independence and freedom of factory life. This may well be true given the fact that so many women had come from very strict homes where they worked as domestic servants. Source A fails to mention how life in the factory was but the author seems pleased to get away from domestic service. ...read more.

4. Use source G and your own knowledge to explain why some men opposed the employment of women in industry during the First World War. Source G was written by a woman in 1919, this suggests that the war would still be in recent memory and the source should be fairly trustworthy. The account describes some of the hostilities that were encountered in a male-dominated environment. The woman details instances where she would be given the wrong directions for a certain task so as to create hours more work for her, the woman had her drawer nailed shut by the men and oil poured over her belongings. These events were unfortunately all too common when women were introduced to chauvinistic attitudes in factories and many women found this hectic style of life too much for them and decided to return to their previous jobs as domestic servants. The reason for this work-place bullying was that many of the men were concerned over the fate of their employment, they may have felt threatened by the women invading the traditional male industries such as engineering and munitions, which at the time were considered to be skilled jobs and so workers were paid at a higher rate. With women joining these industries many could see the dilution of the workforce as a problem; the arrival of women diluted the industry, downgrading the skill level and also the rate of pay associated with it. ...read more.

Maintaining a healthy and prosperous country while trying to bring down the army of another is a major challenge for any country and would be made even harder if you were refused the support of your public. By getting deeply involved with the war effort, women showed that they do care about the welfare of their country and are willing to lend a hand when that welfare is threatened. With Britain losing a large percentage of its' population to fight on foreign battle fields the amount of able hands on the home front was drastically low. Women felt that it was their duty to help the struggling government event though it was that same system blocking their way to getting the vote, a move like this showed high tolerance of the situation they were in and also how the women dealt with priorities when they knew the importance of safety. In conclusion I would say that the work of women on the home front did help to swing the final outcome of the war in favour of the Brits. By deciding to join in with the war effort, women doubled the chances that Britain would have had without them; instead of being able to fuel the armed forces with all of the men Britain could provide, we would have had to split the army so that the cogs of society back on home turf would not have stopped turning. The arrival of the female 'war worker' we had a fully-functioning home front as well as an armed forces, both effective at the same time. ...read more.