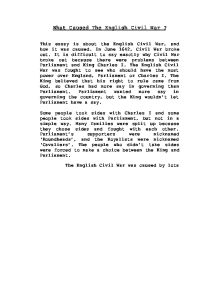 What Caused The English Civil War ?

What Caused The English Civil War ? This essay is about the English Civil War, and how it was caused. In June 1642, Civil War broke out. It is difficult to say exactly why Civil War broke out because there were problems between Parliament and King Charles I. The English Civil War was fought to see who should have the most power over England, Parliament or Charles I. The King believed that his right to rule came from God, so Charles had more say in governing than Parliament. Parliament wanted more say in governing the country, but the King wouldn't let Parliament have a say. Some people took sides with Charles I and some people took sides with Parliament, but not in a simple way. Many families were split up because they chose sides and fought with each other. Parliament's supporters were nicknamed 'Roundheads', and the Royalists were nicknamed 'Cavaliers'. ...read more.

Charles wanted to enforce Anglican reforms onto the Scottish church. Charles was furious that his proposals were rejected by the Scottish Assembly at Glasgow in 1638 and quickly tried to form an English force to march on Scotland in 1639. As Charles did not have the money to do this he was forced to leave Scotland without fighting a battle. Charles found out that Scotland had been plotting with the French so he decided to launch a military expedition. This time, Charles called Parliament in order to get money. When Parliament formed, they immediately wanted to discuss grievances against the government, and were generally opposed to any military operation. Their demands were that Charles' evil ministers must be punished, ministers should be appointed who will advise Charles to follow sensible policies and some of these ministers should come from Parliament. Other demands were that the King must get rid of courts such as the Star Chamber which allowed him to look upon his opponents, regular meetings of Parliament must be held and last but not least there can be no taxes without Parliament's agreement. ...read more.

Parliament also held most of the ports, since the merchants that ran them saw more profit in a Parliament-lead country. Parliament definitely had more access to more resources than the King, and could collect taxes. Charles had to depend on donations from his supporters to fund his armies. Charles' supporters were made to give his armies three things. These three things were food, taxes to keep the army going and themselves to fight for him. This effected communities and families because they got split up. Village homes were destroyed and many innocent people suffered. Some people tried to stop the attacks on their villages.. Before the English Civil War started there were many problems between Charles and Parliament. Both Parliament and the King ordered armies to be organised. People were forced to make a choice about which side they were going to support. There were many battles between the King and other countries and Charles lost all of them. Charles then paid the Scots to leave England and that set off money problems between the King and Parliament. Pippa Harvey 8Y13 ...read more.