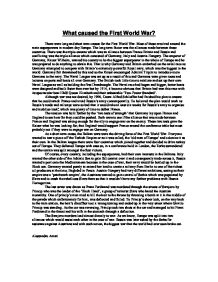 What caused the First World War?

What caused the First World War? There were long and short term causes for the First World War. Most of these revolved around the main superpowers in modern day Europe. The long term factor was the alliances made between these countries. There was the triple-entente which was an alliance between France Britain and Russia and conflicting was the triple-alliance which consisted of Germany, Italy and Austria-Hungary. The emperor of Germany, Kaiser Wilhelm, wanted his country to be the biggest superpower in the whole of Europe and he was prepared to do anything to obtain this. That is why Germany and Britain embarked on the naval race as Germany attempted to compete with Britain's extremely powerful Royal navy, which was the biggest in the world. Germany felt threatened by this and so the Kaiser encouraged Admiral Tirpitz to introduce more Germans to the navy. ...read more.

The tension was built further by the 'two tests of strength' that Germany lay upon France and England to see how far they could be pushed. Both were to see if the alliance that was made between France and England was strong enough for the ally to engage war on the enemy. These two tests gave the Kaiser what he was looking for; that England would support France around the conference table but most probably not if they were to engage war on Germany. As a short term cause, the Balkan wars were the driving force of the First World War. Everyone wanted to tear a piece off the Turkish Empire or as it was called, the 'old man of Europe' and colonize it as their own. In the Balkan league there were four countries which joined together and decided to drive turkey out of Europe. ...read more.

One of princip's men tried to kill the heir to the throne by throwing a bomb at it in the middle of the parade which unfortunately for him, was deflected and failed. To Princip's sheer luck, on the way back to the train station, the heir's chauffeur tool a wrong turning and ended up in the very street where Gavrilo Princip was standing. As the car was reversing, Princip took two shots at the car and managed to hit Franz Ferdinand in the throat and his wife in the stomach through a deflection. The Sarajevo murders lead almost directly to war. As we know, Europe was split into two alliances which would assist each other in the case of war. Russia was later asked by the Serbs for assistance against Austrians and with such action, the biggest war that the world had ever seen broke out. Alessandro Amati ...read more.