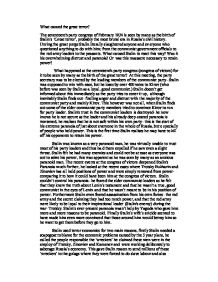 What caused the great terror? The seventeenth party congress of February 1934 is seen by many as the birth of Stalins Great terror, probably the most brutal era in Russias civil history.

What caused the great terror? The seventeenth party congress of February 1934 is seen by many as the birth of Stalin's 'Great terror', probably the most brutal era in Russia's civil history. During the great purge Stalin literally slaughtered anyone and everyone who questioned anything to do with him; from the communist government officials to the red army leaders to the peasants. What caused Stalin to react this way? Was it his overwhelming distrust and paranoia? Or was this massacre necessary to retain power? What happened at the seventeenth party congress (congress of victors) for it to be seen by many as the birth of the great terror? At this meeting, the party secretary was to be elected by the leading members of the communist party- Stalin was supposed to win with ease, but he loses by over 400 votes to Kirov (who before was seen by Stalin as a loyal, good communist.) Stalin doesn't get informed about this immediately as the party tries to cover it up, although inevitably Stalin finds out- fuelling anger and distrust with the majority of the communist party and mainly Kirov. ...read more.

has all held positions of power and were simply removed from power- comparing it to how it could have been him at the congress of victors. Stalin couldn't control his paranoia- he feared the elder communist leaders as he felt that they knew the truth about Lenin's testament and that he wasn't a true, good communist in the eyes of Lenin and that he wasn't meant to be in his position of power. Furthermore Stalin even feared assassination from his own forces- the red army and the secret claiming they had too much power, and that the red army were likely to be loyal to their inspirational leader (Stalin's enemy) during the war- Trotsky. Stalin's ever-present paranoia wasn't help by Yagoda who gave him more and more reasons to be paranoid. Finally Stalin's wife's suicide seemed to have made him even more convinced that those around him would betray him so he want to get them before they go to him. Stalin used terror economics for two main reasons, firstly Stalin needed a scapegoat to blame for the economic problems caused by the 5 year plans, he called the people ...read more.

In addition to this Stalin then arrests Zinoviev and Kamenev for conspiracy to murder- a clever method to remove 3 of his top opponents who he was clearly paranoid greatly about. Kirov's murder marked the first victim of the great terror; it showed the length Stalin would go to remove key political opponents. In conclusion I feel that the overwhelming reason for the birth of the great terror was Stalin's uncontrollable paranoia, he couldn't trust any man with slightly contrasting views to him or even people who threatened his power, this was displayed by the murder of Kirov who had been seen by Stalin as a good communist before his popularity grew which was shown in the congress of victory. His murder is seen as 'the immediate pretext of the great terror' and his murder was a direct cause of Stalin's paranoia. The name 'the great terror' could also speak for itself as Stalin's was terrified of just about all opponents which lead to large a massacre of just about anyone who spoke out against Stalin which lead to the country living in terror of Stalin. ...read more.