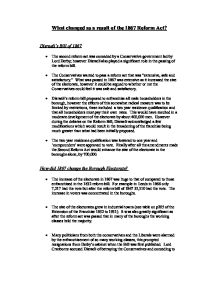 What changed as a result of the 1867 Reform Act?

What changed as a result of the 1867 Reform Act? Disraeli's Bill of 1867 * The second reform act was conceded by a Conservative government led by Lord Derby; however Disraeli also played a significant role in the passing of the reform bill. * The Conservatives wanted to pass a reform act that was "extensive, safe and satisfactory." What was passed in 1867 was extensive as it increased the size of the electorate, however it could be argued to whether or not the Conservatives could feel it was safe and satisfactory. * Disraeli's reform bill proposed to enfranchise all male householders in the borough, however the effects of this somewhat radical measure was to be limited by restrictions, these included a two year residence qualification and that all householders must pay their own rates. ...read more.

For example in Leeds in 1866 only 7,217 had the vote but after the reform bill of 1867 35,510 had the vote. The increase in voters was concentrated in the boroughs. * The size of the electorates grew in industrial towns (see table on p205 of the Extension of the Franchise 1832 to 1931). It was also greatly significant as after the reform act was passed that in many of the boroughs the working classes held the majority. * Many politicians from both the conservatives and the Liberals were alarmed by the enfranchisement of so many working classes, this prompted resignations from Derby's cabinet when the Bill was first published. ...read more.

* In the boroughs even the house holders franchise was hindered by many restrictions. The one year residence requirement discriminated against a significant proportion of the working class males (as high as 30%) who moved frequently from one property to another. Some men were specifically excluded from the franchise such as those adult makes still living with their parents, lodgers paying less than �10 rent a year and servants. * Men who owned property were still allowed to vote in each constituency in which their properties were situated. It was not uncommon for many owners of businesses to have factories of offices in a borough but to live in a county nearby, such people were allowed to vote in both borough and county elections. Plural voting gave the middle classes and landowners more political weight in the system and represented 7% of the total electorate. ...read more.