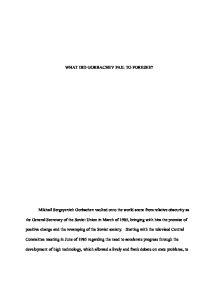 What did Gorbachev fail to forsee?

WHAT DID GORBACHEV FAIL TO FORESEE? Mikhail Sergeyevich Gorbachev vaulted onto the world scene from relative obscurity as the General Secretary of the Soviet Union in March of 1985, bringing with him the promise of positive change and the revamping of the Soviet society. Starting with the televised Central Committee meeting in June of 1985 regarding the need to accelerate progress through the development of high technology, which allowed a lively and frank debate on state problems, to the introduction of perestroika and glasnost, Gorbachev set out to implement change throughout the Soviet Union.i This change was at first meant to liberate and improve a failing economy and economic system, but was soon after to spread to all spheres of the society. Gorbachev had much in his favor. The new, young (54 years old) general secretary had discussed changes prior to ascending to his new powerful position, thus softening their impact. He accomplished an almost complete turnover of the Central Committee secretaries and department heads favoring young reform minded individuals, and the people of the Soviet Union were ready for and expected change. However, by August of 1991, a mere six years from Gorbachev's election, it seemed that everything had gone awry and all hope of positive reform from his leadership was lost. The large disparity between the hope and promise of the summer of 1985 and the reality of 1991 begs one to ask: what happened? ...read more.

Gorbachev failed to devise a unified concept of development and failed to see the country's problems in a macro type of view. He tried to move ahead on specific details without having an overall plan for reconstruction and reform and without a vehicle to implement it.v Gorbachev wished for a more open society and for less in the way of censorship and control over the media than had been the rule prior to 1985. He also wanted to reform the Soviet society, but remembered what had happened to Khrushchev and his disappearance overnight in October of 1964. Khrushchev had shocked Soviet society with his denunciation of Stalin before the Twentieth Congress of the Party. The secret speech and its revelations shook the foundations of what every Soviet citizen and communist had been taught. The continuing attacks on Stalin coupled with his constant innovations in the Soviet economy and administration angered his fellow oligarchs and, through a palace coup, they removed him. Khrushchev fell because he continued to allow Soviet politics to be conducted in a conspiratorial way, when he was removed there was not a single protest. This fate of his predecessor was not lost on Gorbachev, and to avoid a similar fate at the hands of his colleagues, he created an atmosphere that would not allow a few members of the Politburo to plot in secret behind his back - Glasnost. ...read more.