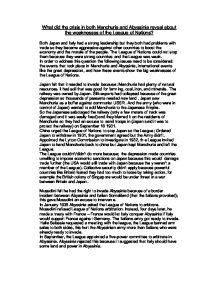 What did the crisis in both Manchuria and Abyssinia reveal about the weaknesses of the League of Nations?

What did the crisis in both Manchuria and Abyssinia reveal about the weaknesses of the League of Nations? Both Japan and Italy had a strong leadership but they both had problems with trade so they became aggressive against other countries to boost the economy and the morale of the people. The League of Nations could not stop them because they were strong countries and the League was weak. In order to address this question the following issues need to be considered: the events that took place in Manchuria and Abyssinia, international events like the great depression, and how these events show the big weaknesses of the League of Nations. Japan felt that it needed to invade because: Manchuria had plenty of natural resources. It had soil that was good for farming, coal, iron, and minerals. The railway was owned by Japan. Silk exports had collapsed because of the great depression so thousands of peasants needed now land. ...read more.

Instead, four days later, he made a treaty with France - France would let Italy conquer Abyssinia if Italy would support France against Germany. The Italians army got ready to invade. Haile Selassie requested a meeting with the league, the League banned arm sales to both sides, this hurt the Abyssinian army more than Italians who were already ready to invade. In September, the League appointed a five-power committee to arbitrate in Abyssinia. Abyssinia rejected this because it suggested that Italy should have some land and power in Abyssinia. In October 1935, Italy's army invaded Abyssinia. The Italians used tanks and flame-throwers. The Abyssinians had camels, war drums and 12 planes, they were massacred. Haile Selassie requested help from the League of Nations, the League agreed to sanctions on rubber and metals, but it did not stop oil sales. Most importantly, Britain did not close the Suez Canal to Italy, fearing that Italy might declare war on Britain, so Mussolini sent men and supplies to Abyssinia through the British Suez canal. ...read more.

The actions the League took were not powerful enough to stop an aggressive country, for example the sanctions on weapons sales to Italy and Abyssinia affected Abyssinia more because the Italians were ready to invade. Britain should have closed the Suez Canal, this would have stopped Italian troops reaching Abyssinia but Britain didn't want to risk a war with Italy. The world's economic climate at this time made the League's job even harder; the world was in The Great Depression so international trade was damaged, the League didn't want to damage trade any further by imposing needless sanctions. Also the peoples of the countries that were severely affected by the depression turned to dictators for answers, the League didn't want this so they tried not to make the situation worse by imposing severe sanctions. All these failures of the League of Nations other countries realised that they could also get away with aggression, this paved the way for the rise of Hitler (he re-militarized the Rhineland in 1936 and the league did not take any action) and the Second World War. ...read more.