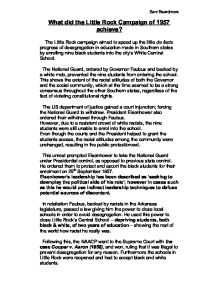 What did the Little Rock Campaign of 1957 achieve?

Sam Beardmore What did the Little Rock Campaign of 1957 achieve? The Little Rock campaign aimed to speed up the little de facto progress of desegregation in education made in Southern states by enrolling nine black students into the city's White Central School. The National Guard, ordered by Governor Faubus and backed by a white mob, prevented the nine students from entering the school. This shows the extent of the racist attitudes of both the Governor and the social community, which at the time seemed to be a strong consensus throughout the other Southern states, regardless of the fact of violating constitutional rights. ...read more.

This unrest prompted Eisenhower to take the National Guard under Presidential control, as opposed to previous state control. He ordered them to protect and escort the black students for their enrolment on 25th September 1957. Eisenhower's leadership has been described as 'seeking to downplay the political side of his role'; however in cases such as this he would use indirect leadership techniques to defuse potential sources of discontent. In retaliation Faubus, backed by racists in the Arkansas legislature, passed a law giving him the power to close local schools in order to avoid desegregation. ...read more.

Furthermore the schools in Little Rock were reopened and had to accept black and white students. In conclusion the NAACP's campaign in Little Rock demonstrated the effectiveness of testing the Supreme Court's rulings; ensuring de jure change was also a de facto change by making it illegal to oppose desegregation - an offence now punishable by law. The campaign also prompted President Eisenhower to take up political reigns and proffer ideals to support desegregation - this gained great authority for the causes of the NAACP. And lastly, the desegregation in schools would begin to introduce ideas of equality and fairness between different races to children at a very young age. ...read more.