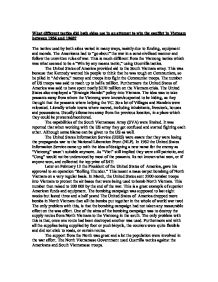 What different tactics did both sides use in an attempt to win the conflict in Vietnam between 1956 and 1968?

What different tactics did both sides use in an attempt to win the conflict in Vietnam between 1956 and 1968? The tactics used by both sides varied in many ways, mainly due to funding, equipment and morals. The Americans had to "go about" the war in a semi-civilised manner and follow the unwritten rules of war. This is much different from the Vietcong tactics which was what seemed to be a "Win by any means tactic," using Guerrilla tactics. The United States of America provided aid to the South Vietnam army. This was because that Kennedy wanted his people to think that he was tough on Communism, so he piled in "Advisors," money and troops into fight the Communist troops. The number of US troops was said to reach up to half a million. Furthermore the United States of America was said to have spent nearly $270 million on the Vietnam crisis. The United States also employed a "Strategic Hamlet" policy into Vietnam. ...read more.

The United States of America dropped more bombs in North Vietnam than all the bombs put together in the whole of world war two! The only problem with this, is that the bombing campaign had not taken any measurable effect on the was effort. One of the aims of the bombing campaign was to destroy the supply routes from North Vietnam to the Vietcong in the south. The only problem with this is that, once one route had been destroyed another was used. Furthermore and with all the supplies being supplied by foot or push bicycle, the couriers were quite flexible and did not stick to roads, or certain routes. The support from the North was great and a lot the population were involved in the war effort. The North Vietnamese Government used Guerrilla tactics against the Americans and South Vietnamese troops. These Guerrilla tactics were a much different way, and some say better way of fighting than the American's used. ...read more.

They often went out on search and destroy missions. To basically destroy any town they came across that they suspected to be Vietcong sympathisers. "Zippo" raids were often exercised, which involved soldiers setting fire to the straw roofs of homes with their Zippo lighters. The American's became extremely frustrated at the fact they were losing a war to a bunch of rebels in a country that was/is inferior financially and militarily. In Mylia, the American's resorted to perhaps one of the worst things to do in war; Massacre. The official report was that troops had killed 90 VC fighters although the reality was much different. Some reports have been released of 347 men, women and children killed and the women being raped first, other reports put the death count at over 500. The massacre of these people came out of frustration and the anxious feelings that they had to win. It happened at the same time, as the VC Tet offensive was raging. After all this we can see clearly that the Vietcong fought better and harder to win against all odds. The Americans withdrew in October 1972. Words = 1,079 ...read more.