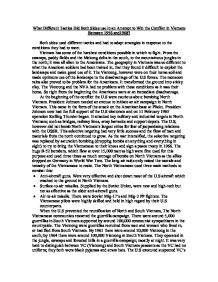 What Different Tactics Did Both Sides use in an Attempt to Win the Conflict in Vietnam Between 1956 and1968?

What Different Tactics Did Both Sides use in an Attempt to Win the Conflict in Vietnam Between 1956 and1968? Both sides used different tactics and had to adapt strategies in response to the conditions they had to meet. Vietnam has some of the harshest conditions possible in which to fight. From the swamps, paddy fields and the Mekong delta in the south, to the mountainous jungles in the north; it was all alien to the Americans. The geography in Vietnam was so different to what the American soldiers had been trained in, that they found it difficult to exploit the landscape and make good use of it. The Vietcong, however were on their home soil and made optimum use of the landscape to the disadvantage of the U.S forces. The monsoon rains also proved to be problem for the Americans. It transformed the ground into sticky clay. The Vietcong and the NVA had no problem with these conditions as it was their home. So right from the beginning the Americans were at an immediate disadvantage. At the beginning of the conflict the U.S were cautious about bombing North Vietnam. President Johnson needed an excuse to initiate an air campaign in North Vietnam. This came in the form of the attack on the American base at Plieku. ...read more.

Other booby traps included the 'Bouncing Betty', a mine that was buried just under the surface of the path which would explode when someone walked over it; and the 'Tin Can' trap, a grenade with detonating mechanism attached to trip wire. One historian said, "Booby traps accounted for 11 per cent of American deaths in Vietnam and 17 per cent of wounds,". America had to respond and find a way of avoiding booby traps. The U.S army was trained in conventional methods of war, where they fought with a front line. The VC, however would not fight face to face as they knew they could not win. Instead they waged guerrilla war; ambushes, booby traps, night-time raids and most importantly, no front line. To overcome this problem the U.S hunted down the VC on search and destroy missions. On search and destroy missions American soldiers would search fields, jungle and villages for the Vietcong and kill as many as they could. Locating Vietcong proved difficult and it was hard to ascertain how successful search and destroy missions. The body count was introduced to do just that. This was the number of Vietcong killed. The more Vietcong killed, the more successful the mission was. To get round the multitude of difficulties that America had to face in Vietnam, the U.S used helicopters. ...read more.

So it came as a major shock, when celebrating the Tet Festival of Lunar New Year, on 31st January 1968, communist rocket and mortar fire rained on over a hundred cities (including the capital Saigon) in South Vietnam. The Tet offensive was a great risk as it exposed the VC to enemy fire for the first time. The North Vietnamese plan was that the South Vietnamese people would grow sick of the conflict and rise against the South Vietnamese government to support the North, forcing the U.S out. This did not happen, however and the VC and NVA lost 30,000 men; they would never recover their full strength. The U.S media were so shocked that the VC and NVA put up such fight (even though they actually lost) that they gave the impression, to the American public that the U.S had suffered a defeat. U.S congress refused to give Westmoreland anymore troops and L.B.J decided not to stand for re-election. In 1968 peace talks between North and South Vietnam began. The gradual withdrawal of U.S troops went on from 1968 to1973. Despite the fact that only 2 per cent of the people killed in the Tet offensive were American, compared with 71 per cent that were from the VC or NVA during its 'victory', the Tet offensive was the beginning of the American defeat in Vietnam. Both sides ultimately had to use a combination of tactics between 1956 and 1968 to respond to the enemy. By Nicholas Kawecki ...read more.