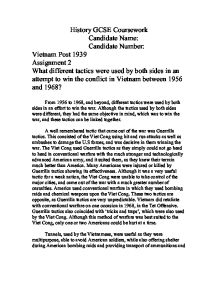 History GCSE Coursework Candidate Name: Candidate Number: Vietnam Post 1939 Assignment 2 What different tactics were used by both sides in an attempt to win the conflict in Vietnam between 1956 and 1968? From 1956 to 1968, and beyond, different tactics were used by both sides in an effort to win the war. Although the tactics used by both sides were different, they had the same objective in mind, which was to win the war, and these tactics can be linked together. A well remembered tactic that came out of the war was Guerrilla tactics. This consisted of the Viet Cong using hit and run attacks as well as ambushes to damage the U.S forces, and was decisive in them winning the war. The Viet Cong used Guerrilla tactics as they simply could not go head to head in conventional warfare with the much stronger and technologically advanced American army, and it suited them, as they knew their terrain much better than America. Many Americans were injured or killed by Guerrilla tactics showing its effectiveness. Although it was a very useful tactic for a weak nation, the Viet Cong were unable to take control of the major cities, and came out of the war with a much greater number of casualties. ...read more.

tortured or killed. America simply did not know how to win the 'hearts and minds', and this was a major factor in their inability to control the war. Torture and interrogation was used by both America and the Viet Cong to gather intelligence of the enemy's whereabouts and to discover traitors. America set up 'Operation Phoenix', aiming to capture and interrogate 3,000 Viet Cong per month. This tactic could be used to find out where villages allegiances were, and to find out whether a village had been taken over by propaganda or force. America's target of 3,000 Viet Cong a month was unrealistic. This tactic links in as a reason why 'hearts and minds' did not work. Torture and interrogation worked better for the Viet Cong, as they would be more likely to know who's 'sleeping with the enemy'. Torture and interrogation did not provide reliable intelligence to America and often, innocent Vietnamese were killed in revenge for lost comrades. Surgical bombing was first used in 'Operation Rolling Thunder', in which it was used to destroy selected targets, usually roads, bridges and barracks. America thought this tactic would demoralise the Vietnamese. ...read more.

It can also be seen as unsuccessful as America still could not get a stronghold on the war, and massacres on innocent people like at 'My Lai' were transmitted to the West through the media, which resulted in more anti-war protests. 'Search and destroy' links in with another tactic, 'high body count'. American Generals thought that the war would be won by killing everything in site, because eventually everything would be wiped out, therefore insisted on putting the tactic 'high body count' into action. Unfortunately for America, the Viet Cong were willing to suffer great losses. 'High body count' was not effective as soldiers and Generals would exaggerate kills, so the exact number of kills could not be pinpointed. From the pro-war American view, it was effective as many Vietnamese were killed. The native's of both countries had a lot to say against the war. In protest, Vietnamese Buddhists burnt themselves alive while praying. In America, the students were causing a rebellion, with marches and demonstrations of their own, in protest against the war. Although many tactic's were used by both sides in the Vietnam War, the most effective tactics used by Vietnam were the guerrilla tactics, and for America it was the 'search and destroy' tactics, due to its ability to wipe out enemy bases in a matter of hours. ...read more.