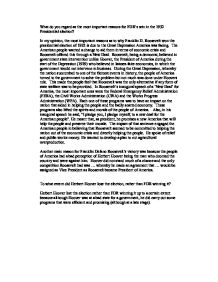 What do you regard as the most important reasons for FDRs win in the 1932 Presidential election?

What do you regard as the most important reasons for FDR's win in the 1932 Presidential election? In my opinion, the most important reasons as to why Franklin D. Roosevelt won the presidential election of 1932 is due to the Great Depression America was facing. The American people wanted a change to aid them in terms of economic crisis and Roosevelt offered this through a New Deal. Roosevelt, being a democrat, believed in government state intervention unlike Hoover, the President of America during the start of the Depression (1929) ...read more.

In Roosevelt's inaugural speech of a 'New Deal' for America, the most important ones were the Federal Emergency Relief Administration (FERA), the Civil Works Administration (CWA) and the Works Progress Administration (WPA). Each one of these programs was to have an impact on the nation that aided in helping the people and the badly scarred economy. These programs also lifted the spirits and morals of the people of America. Also, in his inaugural speech he said, "I pledge you, I pledge myself, to a new deal for the American people". ...read more.

Hoover did not stand much of a chance and the only competition Roosevelt had was ... whereby he made an agreement that ... would be assigned as Vice President as Roosevelt became President of America. To what extent did Herbert Hoover lose the election, rather than FDR winning it? Herbert Hoover lost the election rather than FDR winning it up to a certain extent because although Hoover was at a bad state for a government, he did carry out some programs that were efficient and promising (although at a late stage). ...read more.