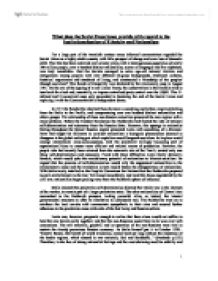 What does the Soviet Experience provide with regard to the Institutionalisation of Ethnicity and Nationalism.

What does the Soviet Experience provide with regard to the Institutionalisation of Ethnicity and Nationalism For a large part of the twentieth century many informed commentators regarded the Soviet Union as a highly stable country with little prospect of change and even less of domestic strife. That this had been achieved over seventy years; with a heterogeneous population of nearly 300 million people; over a hundred distinct nationalities; scores of languages and five alphabets, was truly remarkable. Had the Soviets managed to solve age-old national rivalries and antagonisms among peoples with very different religious backgrounds, traditional cultures, historical experiences and standards of living; and constructed a 'friendship of the peoples' through socialism? This facade of tranquillity was shattered by the reactionary coup in August 1991. On the eve of the signing of a new Union Treaty, the conservatives in the Kremlin tried to turn back the clock and, essentially, re-impose centralised party control over the USSR. This ill-advised and ill-conceived coup only succeeded in hastening the end of the Soviet Union and replacing it with the Commonwealth of Independent States. In 1917 the Bolsheviks inherited from the tsars a crumbling multiethnic empire stretching from the Baltic to the Pacific, and compromising over one hundred distinct nationalities and ethnic groups. The relationship of these non-Russian minorities presented the new regime with a major problem. ...read more.

As well as forcibly reoccupying the Baltic States, Russification and oppression of the 'fraternal and equal' republics began with a vengeance. All of Lenin's policies were reversed; cultural diversity was stamped out and the Russian language was promoted vigorously. The Russification of the Soviet Union reached its last. Stalin removed any doubt that the Russian people were pre-eminent in the USSR when, as part of the 1945 victory celebrations, he proposed..."a toast to our Soviet people, and in particular to the health of the Russian people.... the leading nation of all nations belonging to the Soviet Union, because in this war, the Russian people have earned the general recognition as the guiding force of the Soviet Union among all the other peoples of our country." (Smith: p.7) Like Lenin before him, Stalin was quite aware of the potency of the national problem. However, he relied upon a combination of terror and Great Russian chauvinism to keep the non-Russians subdued. In 1956, at the historic 20th Party Congress, the new General Secretary, Nikita Khrushchev, publicly rebuked Stalin and his practices. He exposed the mass deportation of non-Russian's and promised, selectively, to restore both their nationality contracts and their homelands. Regional economic councils were introduced, with substantial autonomous powers, in an effort to bring the living standards of all the republics into line. ...read more.

The aim of the Soviet State, at its inception, was to merge the diverse nations and ethnic groups into a homogenous economic and political unit, which would reflect the needs and wishes of the proletariat, rather than bourgeois national aspirations. Unfortunately, these aims acquired a distinctly Russian flavour and abrogated the equality and harmony required to achieve these goals. The fluctuations in the assimilative policies of the soviet leaders, from mild discouragement of ethnic affiliation to outright repression; suppressed ethnic identification but engendered long-term hostility. Furthermore, Gorbachev's policies of 'glasnost' 'perestroika' and democratisation, reduced the level of coercion in the system and allowed people to express their national and cultural aspirations, and air their grievances about their status. When these grievances were combined with the changing demographic trends in the Soviet Union, and the general economic malaise, national and ethnic chauvinism began to gather momentum and become reinforcing; as one ethnic group asserted its identity, so another would be spurred to action. Moscow's leaders struggled for decades to create a Soviet "nation," a "soviet way of life". In the end, they spawned a congeries of ethnic nations that repudiated "sovietism" the moment the Union collapsed. Ultimately, the soviet union had been conceived as an ideological state: a state in which class consciousness and solidarity were to be more important than national or ethnic affiliations, when this ideology proved flawed, and the power of the state finite, the raison d'etre of the Union collapsed and another institutionalised form for its expression had to be adopted. ...read more.