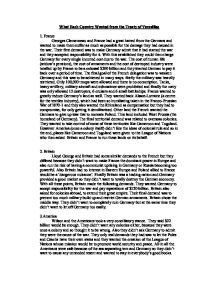 What Each Country Wanted from the Treaty of Versailles

What Each Country Wanted from the Treaty of Versailles 1. France Georges Clemenceau and France had a great hatred from the Germans and wanted to make them suffer as much as possible for the damage they had caused in the war. Their first demand was to make Germany admit that it had started the war and they accepted responsibility for it. With this established they could then charge Germany for every single incurred cost due to the war. The cost of human life (widow's pensions), the cost of armaments and the cost of destroyed industry were totalled up by France to be a colossal $200 billion and they wanted German to pay it back over a period of time. The final goal of the French delegation was to weaken Germany and this was to be achieved in many ways. ...read more.

Other land the French wanted the Germans to give up was that to recreate Poland. This land included West Prussia (the homeland of Germany). The final territorial demand was related to overseas colonies. They wanted to take control of some of these territories like Cameroon and Togoland. However America (once a colony itself) didn't like the ideas of colonial rule and so in the end, places like Cameroon and Togoland were given to the League of Nations who then asked Britain and France to run these lands on its behalf. 2. Britain Lloyd George and Britain had some similar demands to the French but they differed because they didn't want to make France the dominant power in Europe and also run the risk of having a communist uprising in Germany or Russia becoming too powerful. ...read more.

Britain chose the middle way. They didn't want to completely ruin Germany but at the same time they didn't want to let off Germany too easily. 3.America Wilson and the Americans took a very conciliatory stance. They said $22 billion would be enough. They didn't want any colonies either, because they were once a colony and so thought it to be wrong. Also they didn't ask Germany to admit they were the cause of the war. They only real demands they had was to let the Poles and Czechs have their own states and they wanted the creation of the League of Nations whose mission would be to promote world security and peace. All in all the Americans were safe because of the sea separating tem and Germany so they didn't want to cause any unneeded resent and wanted to stay in everybody's good books. ...read more.