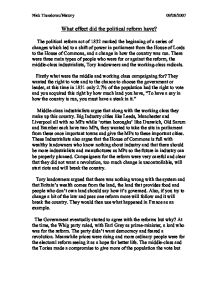 What effect did the political reform have?

What effect did the political reform have? The political reform act of 1832 marked the beginning of a series of changes which led to a shift of power in parliament from the House of Lords to the House of Commons, and a change in how the country was run. There were three main types of people who were for or against the reform, the middle-class industrialists, Tory landowners and the working-class radicals. Firstly what were the middle and working class campaigning for? They wanted the right to vote and to the chance to choose the government or leader, at this time in 1831 only 2.7% of the population had the right to vote and you acquired this right by how much land you have, "To have a say in how the country is run, you must have a steak in it." ...read more.

Tory landowners argued that there was nothing wrong with the system and that Britain's wealth comes from the land, the land that provides food and people who don't own land should say how it's governed. Also, if you try to change a bit of the law and pass one reform more will follow and it will break the country. They would then use what happened in France as an example. The Government eventually started to agree with the reforms but why? At the time, the Whig party ruled, with Earl Grey as prime-minister, a lord who was for the reform. The party didn't want democracy and feared a revolution. Meanwhile prices were rising and more ordinary people were for the electoral reform seeing it as a hope for better life. ...read more.

This was the beginning of the process that leads us to the modern day. The 1832 reform act was the first step towards bringing more people the right to vote. This initial reform act had a knock-on effect and a power shift from the minority to the majority. Today we live in a democracy and back then though not everyone could vote it was starting an increase in 'power to the people,' which is exactly what democracy means. Politics needed to change but if you change to much too soon it gets out of hand, the fact that little changes were done throughout the ages stopped a revolution prevented a riot, and got politics where it needed to be. ?? ?? ?? ?? Nick Theodorou/History 09/28/2007 ...read more.