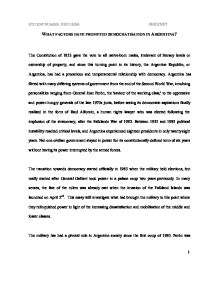 What factors have prompted democratisation in Argentina?

WHAT FACTORS HAVE PROMPTED DEMOCRATISATION IN ARGENTINA? The Constitution of 1853 gave the vote to all native-born males, irrelevant of literacy levels or ownership of property, and since this turning point in its history, the Argentine Republic, or Argentina, has had a precarious and temperamental relationship with democracy. Argentina has flirted with many differing systems of government from the end of the Second World War, involving personalities ranging from General Juan Per�n, the 'saviour of the working class,' to the oppressive and power-hungry generals of the late 1970s junta, before seeing its democratic aspirations finally realised in the form of Raul Alfonsin, a human rights lawyer who was elected following the implosion of the stratocracy, after the Falklands War of 1982. Between 1955 and 1983 political instability reached critical levels, and Argentina experienced eighteen presidents in only twenty-eight years. Not one civilian government stayed in power for its constitutionally-defined term of six years without having its power interrupted by the armed forces. The transition towards democracy started officially in 1983 when the military held elections, but really started after General Galtieri took power in a palace coup two years previously. In many senses, the fate of the rulers was already cast when the invasion of the Falkland Islands was launched on April 2nd. This essay will investigate what had brought the military to this point where they relinquished power in light of the increasing dissatisfaction and mobilisation of the middle and lower classes. The military has had a pivotal role in Argentine society since the first coup of 1930. Per�n was democratically elected in 1946, and was exiled to Paraguay in September 1955 by the coup that finished his reign as president. The Per�nists returned to power in the elections of March 1973. After his 'stand-in' Dr Hector Campora had held elections, Per�n returned, and turned on the revolutionary left by banning the People's Revolutionary Army (ERP1); the Marxists, who were later to wage a violent 'dirty' war against the military. ...read more.

and, above all, to adjust their domestic economies to a rapidly changing and not always rational world.10 Needless to say, inflation had increased to an annual rate of 1000%, and per capital income had plummeted from being eighth in the world in 1930, to sixty-fifth in 1980. Politically, the military's hold on authority had become somewhat dissolved. Societal actors had started to push forward their opinions. For example, Raul Alfonsin, the future Radical leader and future President replied to Galtieri by saying that 'if General Galtieri, commander-in-chief of the Army, and a member of the junta, has said that the ballot boxes are well stored and will remain that way for a long time, we respond to him that they should start dusting them because we will fill them with votes.'11 Instead of the apathetic and discouraged society that Galtieri expected and planned for, society had started to politicise and mobilise itself. In short, people were getting weary of military rule in the Argentine Republic. After the montoneros guerrillas were defeated at the end of the seventies, the military's power of random oppression was severely diminished. It found it increasingly difficult to justify the kidnapping and killing of 'subversive elements' if they had all been defeated in battle. '...Regimes will face a threat to their existence once they lose the capacity to repress "arbitrarily." Once it appears to lose this power, opposition is likely to test the governments' will by resorting to marches, demonstrations, strike and perhaps acts of overt violence.'12 The opponents of the regime began to gain in confidence. The union leaders, traditionally Per�nist, by the beginning of 1982 had become very irate. Defeated in 1976, they had sought to develop a relationship with the junta whilst Viola ran it. Galtieri's coup irreconcilably changed this. In February of 1982, the Labour Ministry informed the unions that both the wage freeze and the ban on collective bargaining would continue indefinitely. ...read more.

The societal actors, the opposition to the regime, tried to push the ruling elites from supremacy, and this ended in the elites being forced to partake in increasingly desperate and precarious tactics. When military defeat finally came, the junta stood no chance of a return to power, and so, grudgingly, initiated the transitional process. The transitional process, when it happened took place in the context of such a weak elite that the opposition essentially dictated the process. Nationalism is not to be confused with patriotism. Both words are normally used in so vague a way that any definition is liable to be challenged, but one must draw a distinction between them, since two different and even opposing ideas are involved. By 'patriotism' I mean devotion to a particular place and a particular way of life, which one believes to be the best in the world but has no wish to force on other people. Patriotism is of its nature defensive, both militarily and culturally. Nationalism, on the other hand, is inseparable from the desire for power. The abiding purpose of every nationalist is to secure more power and more prestige, not for himself but for the nation or other unit in which he has chosen to sink his own individuality.17 The aftermath of the war brought disorientation and confusion to the Argentine people. The military regime had relied so heavily on warping the thoughts of the populace, and shaping their perceptions of cultural identity and harmony. Tangled notions of a love for their country, coupled with a disbelief of the scale of the devastation to society on so many levels, emphasised the collective sense that a historical turning point had been reached in Argentine history. The transition to democracy would be long and arduous, and would inevitably be forced to tackle with many potentially thorny and divisive issues, such as trials of officers and investigations into the desparecidos. Argentina's next twenty years would be fraught with emotion, stigmas and home truths, and would eventually culminate in economic ruin. But no longer would people be afraid to speak their minds. ...read more.