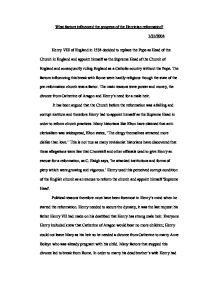 What factors influenced the progress of the Henrician reformation?

What factors influenced the progress of the Henrician reformation? 1/31/2004 Henry VIII of England in 1534 decided to replace the Pope as Head of the Church in England and appoint himself as the Supreme Head of the Church of England and consequently ruling England as a Catholic country without the Pope. The factors influencing this break with Rome were hardly religious though the state of the pre-reformation church was a factor. The main reasons were power and money, the divorce from Catherine of Aragon and Henry's need for a male heir. It has been argued that the Church before the reformation was a failing and corrupt institute and therefore Henry had to appoint himself as the Supreme Head in order to reform church practices. Many historians like Elton have claimed that anti- clericalism was widespread, Elton states, 'The clergy themselves attracted more dislike than love.' This is not true as many revisionist historians have discovered that these allegations were lies that Cromwell and other officials used to give Henry an excuse for a reformation, as C. Haigh says, 'he attacked institutions and forms of piety which were growing and vigorous.' Henry used this perceived corrupt condition of the English church as an excuse to reform the church and appoint himself 'Supreme Head'. Political reasons therefore must have been foremost in Henry's mind when he started the reformation. ...read more.

Anne Boleyn also had a lot of influence over Henry, she convinced Henry of protestant ideas very easily as he was madly in love with her over many years. Anne's pregnancy in late 1532 would probably have made Henry think about ending Papal influence and giving himself the power to divorce Catherine and marry Anne, otherwise their forthcoming child would be illegitimate. This would have been unacceptable for an heir to the throne. The death of Worham, the Archbishop of Canterbury in August 1532 was of significance. Perhaps events would not have occurred as they did if he had lived. He was a staunch believer that the Pope should be head of the church in England and he might have challenged Henry's decision to break from Rome. The new Archbishop Thomas Cranmer was happy to go along with Henry's decisions. Another factor influencing the progress of the reformation was Henry's desire to be more wealthy and powerful. Henry wanted sole power on everything within his country. It can be argued that Henry's desire, encouraged probably by Cromwell and Cranmer to take over the church as an institution and use it to extend his power both at home and abroad, played a pivotal role in the Reformation. Henry wanted this cesaropapism - the power over both the state and the church - to increase his own power. ...read more.

Henry could also close down monastic institutions and strip them of their belongings. Ornaments, statues, windows and roofing were all taken and sold with the proceeds going straight to the king. In some cases he sold the entire monastery to wealthy landowners to convert into homes. There was also a large lump sum gained from the sale of bullion, plate, jewellery and bell metal from the monasteries. Although Henry's original intention was to close the smaller monasteries, the larger institutions began to dispose their assets so Henry closed them as well. In other words as Randell puts it, "Henry intended to steal half the apples, and then found the rest virtually fell into his lap". The only way Henry could have obtained this obvious church wealth was to become the Supreme Head of the Church of England, which he did in January 1535, therefore cutting all ties with the Pope in Rome. However I believe that the main factors influencing the Henrician reformation can be summed up in the following quote from Christopher Harper-Bill, "we must return to Henry VIII's matrimonial problems and financial needs as the ultimate cause of the Reformation in England". Though many factors did influence the reformation I think the starting point was Henry's belief in his invalid marriage to Catherine of Aragon and his desperate need for an heir, this ultimately lead to the reformation and the other factors I have discussed contributed to it. ...read more.