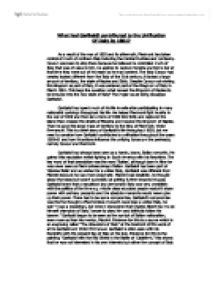 What had Garibaldi contributed to Italian Unification by 1861

What had Garibaldi contributed to the Unification Of Italy by 1861? As a result of the war of 1859 and its aftermath, Piedmont has taken control of much of northern Italy including the Central Duchies and Lombardy. Cavour was keen to stop there because he believed he controlled much of Italy that was of value to him, he aspired to capture Venetia and Rome but at that time they were out of his reach so he was content. The Italy Cavour had created looked different from the Italy of the 21st century; it lacked a large amount of territory, the state of Naples and Sicily. Despite Cavour not wishing this kingdom as part of Italy, it was declared part of the Kingdom of Italy in March 1861. This begs the question; what caused the Kingdom of Naples to be included into the new state of Italy? The major cause being Giuseppe Garibaldi. Garibaldi had spent much of his life in exile after participating in many nationalist uprisings throughout his life. He helped Piedmont fight Austria in the war of 1859 and then led a force of 1000 into Sicily and captured the island than crossed the straits of Messina and invaded the kingdom of Naples. Then he gave this large mass of territory to the King of Piedmont, Victor Emmanuel. This is a brief story of Garibaldi's life throughout 1859, but we need to consider how Garibaldi contributes to unification throughout the years 1859-61 and how his actions influence the unifying forces on the peninsula, namely Cavour and Piedmont. Garibaldi had always been seen as a heroic, brave, Italian romantic. He gained this reputation whilst fighting in South America with his Redshirts. The key word of that description was the word 'Italian', although born in Nice he was never seen as Piedmontese always Italian. Garibaldi had been part of 'Giovine Italia' and so wished for a united Italy, Garibaldi was different from Mazzini because he was more pragmatic. ...read more.

This is one thing that Garibaldi contributed to unification up to 1861, is that he put Italian nationalism on the front page of every newspaper over Europe. He shows other Italians his bravery and encourages people to become nationalists like himself e.g. the Red Shirts swelled from 1000 to over 50000, showing how his nationalist ideas had affected other people. This aided unification because the peninsula knew what it meant to be Italian rather than simply Piedmontese, Lombardian or Tuscan easing the tension created by Particularism with some people when Italy was finally united in March 1861. When Garibaldi takes his thousand and conquers Sicily and Naples, he physically forces them to become unified with the rest of Italy because he gives them to the new ruler of Italy and if he is to govern them, they must be incorporated into his state, unified with his state. Garibaldi contributes to Italian unification by 1861 by handing over a sizeable chunk of the Italian peninsula to Victor Emmanuel; this contributes because two ethnically Italian lands are now united by being controlled by the same monarch. Garibaldi contributes by taking over Sicily and Naples by force and therefore once given to Piedmont they are united in the Kingdom of Italy. Although the physical handing over of Naples and Sicily to Victor Emmanuel is a contribution it is not the most important thing Garibaldi contributes, in my opinion. Italian historians will argue that Garibaldi's most important contribution to the unification of Italy was his invasion of Naples and Sicily, and how much a man of principle he was. Yes, he was a man of principle but his main achievement was not the glorious conquest of Sicily and Naples but rather that he forced Cavour to consider the unification of Italy as the whole peninsula rather than just the north. Cavour was satisfied by the results achieved by 1859, he had under his control much of northern Italy. ...read more.

Garibaldi advances with his red shirts towards the Papal Marches and Umbria. Cavour realises that he cannot stand by and let Garibaldi conquer further because he becomes more powerful and the French could intervene, so Cavour rushes the Piedmontese army and conquers them first. Although, Napoleon III and Cavour had agreed this was the correct course of action it caused the loss of nearly all of the Popes temporal power. We now see that Cavour had taken a bold step to stop the advance of Garibaldi. Garibaldi now calls Victor Emmanuel to Neapolitan territory and hand over all his conquests to him. This is what Garibaldi contributes most, he now hand Piedmont territory that Cavour was not interested in, Garibaldi made Cavour see Italy as a nation because it contained rich and poor Italians. He forced Cavour to govern Italy as a nation because much of the peninsula was under his control. Garibaldi then retired back to his island after capturing Sicily and Naples and forcing Cavour to integrate them into the new Kingdom of Italy. To conclude, by 1861 Garibaldi is perceived to have accomplished a lot for unification. He contributes by highlighting the cause of Italian nationalism and through he principles he made this cause seem brave, glorified and full of dignity. His actions forced Cavour to think of Italy as a nation rather than just thinking of Piedmont. He had controlled the situation well and his aim of uniting Italy was almost complete. His biggest contributions were the fact that he pushed full unification into the eyes of the Piedmontese government despite their resentment of the south and due to him the whole of southern Italy is now part of the Kingdom of Italy. So if you ask yourself what Garibaldi contributed to unification of the north, it is relatively insignificant, but if you ask yourself what Garibaldi contributed to unification of Italy then it is significant because he led the unification of the south of Italy to the north. Acknowledgements The Unification of Italy 1815-70 Stiles The Unification of Italy Darby ?? ?? ?? ?? ...read more.