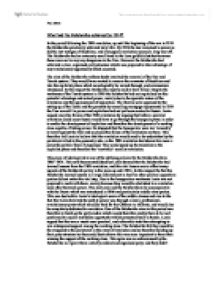 What had the Bolsheviks achieved by 1914?

What had the Bolsheviks achieved by 1914? In the period following the 1905 revolution, up until the beginning of the war in 1914 the Bolsheviks practically achieved very little. By 1914 the tsar remained in power as did the last vestiges of feudalism, and a bourgeois revolution seemed a long way off. The Bolsheviks had an extremely small hand in the Lena goldfield strikes however these were not in any way dangerous to the Tsar. However the Bolsheviks had achieved a clear, organised party structure which was prepared to take advantage of any revolutionary opportunity which occurred. The aims of the Bolsheviks without doubt involved the removal of the Tsar and Tsarist system. They would have wanted to remove the remnants of feudalism and into the capitalist phase which would quickly be moved through, and communism introduced. In this respect the Bolsheviks must be said to have failed. Despite the weakness of the Tsarist system in 1905 the Bolsheviks had not capitalised on this potential advantage and seized power, mainly due to the sporadic nature of the revolution and the appeasement of opposition. The liberals were appeased by the setting up of the Duma and the peasants by cancelling mortgage repayments. ...read more.

Soviet historians were quick to praise the Bolsheviks for this ideological breakthrough and this development of Marxism. Western historians were not without praise either. Many argue that despite the many failures of Bolshevism the ability to learn lessons following the 1905 revolution was a large achievement. Lenin constantly criticised the Mensheviks for their involvement in 'reformism', involvement in the Duma and association with the regime. Lenin viewed this as a betrayal of Marxism. Attempts to reunite the Social Democrat Party in 1906 and 1907 ultimately ended in failure as Lenin was unprepared to accept any compromise on the matter of strategy. The split was made final in the Prague conference in 1912. While the Bolsheviks wanted a small dedicated party isolated from others, the Mensheviks wanted a party which would cooperate with other parties to bring down the Tsar. This is a fundamental difference between the two Marxist parties. The Mensheviks concentrated on the overthrow of the Tsar and their tactics were arguably the more likely to be successful as a large support base would be needed to overthrow the regime. This is why the Mensheviks became increasingly cooperative with the Constitutional Democrats following 1905. ...read more.

Western historians are quick to point out this lack of Bolshevik revolutionary activity in this period, interpreting it as a sign of a weak, disorganised leaderless party. They claim the Bolsheviks lacked support and with their leaders in exile they lacked the ability to cause problems for the Tsar. They claim the war was vital for the Bolsheviks coming to power because it provided opportunities that the Bolsheviks exploited, more by luck than skill. Therefore the Bolshevik party from 1905 to 1914 achieved little practically. Western historians view it as a sign of ineffectiveness whereas Soviet historians claim a period of 'patient consolidation'. By 1914 the Tsar was still in power and the Bolsheviks realistically did not seem likely to take power. However the Bolsheviks achieved much in terms of party organisation. The party cadre was consolidated and lessons learned from the 1905 revolution affected new theories. The party resisted merging with the Mensheviks and remained dedicated to forming a small professional revolutionary party to avoid infiltration by the Okhrana and accelerate Marxism by achieving quick breakthroughs. The bitter fighting of the Bolsheviks weeded out those whose views differed to that of the official party, leaving a revolutionary party focused to the man on the same targets, which left them in good stead to exploit the situation in 1917. ?? ?? ?? ?? Paul Marie ...read more.