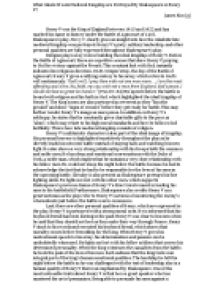 What Ideals Of Late Medieval Kingship Are Portrayed By Shakespeare in Henry V?

﻿What Ideals Of Late Medieval Kingship Are Portrayed By Shakespeare in Henry V? James Kim (g) Henry V was the King of England between 1413 and 1422 and has marked his name in history under the Battle of Agincourt of 1415. Shakespeare?s play, Henry V, clearly gives an insight into how the idealistic late medieval kingship was portrayed. Henry V?s piety, military leadership, and other personal qualities are fully expressed throughout Shakespeare?s play. Religion plays a key role in building the ideal kingship of Henry V. Before the Battle of Agincourt, there are repetitive scenes that show Henry V praying to God for victory against the French. This constant link with God, instantly indicates his religious devotion. On St. Crispin?s Day, the day of the Battle of Agincourt, Henry V gives a rallying oratory to his army, which refers to God?s will continuously. ...read more.

His personal bravery is highlighted repetitively throughout the play as he directly leads his men into battle instead of staying back and watching his men fight. He also shows a very strong relationship with his troops both the common and noble men. He has deep and emotional conversations with the Duke of York, a noble man, which implies that he sustains a very close relationship with his fellow men. He could not sleep the night before the battle because he had to acknowledge the fact that he had to be responsible for the lives of his men in the upcoming battle. Chivalry is also present as Shakespeare portrays his fine fighting skills. He fights on foot with his other men, which supports Shakespeare?s previous claims of Henry V?s direct involvement in leading his men to the battlefield. ...read more.

Such sadness that the king feels is an integral part of the king?s human emotional qualities. The hardship he felt the night before the battle as he was challenged with the test of leadership also is a human quality of Henry V that was emphasised by Shakespeare. One of the most noticeable traits about Henry V is that he is a great speaker who has mastered the art of persuasion. Being able to persuade his men against a French army five times the size of his to willingly join the battle shows his skills as an influential orator with strong leadership skills. Shakespeare portrays diverse aspects of Henry V. His piety and his men?s devoutness is emphasised throughout the play. His character as a military leader as he leads his men to battle also plays a key part of ideal kingship. Other personal characteristics such as being determined, passionate and persuasive all sum up Henry V?s ideal late medieval kingship from Shakespeare?s perspective. ...read more.