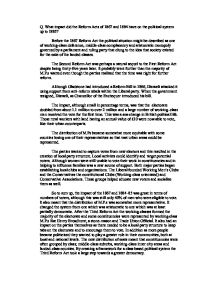 What impact did the Reform Acts of 1867 and 1884 have on the political system up to 1885? Before the 1867 Reform Act the political situation might be described as one of working-class deference, middle-class complacency

Q. What impact did the Reform Acts of 1867 and 1884 have on the political system up to 1885? Before the 1867 Reform Act the political situation might be described as one of working-class deference, middle-class complacency and aristocratic monopoly governed by a parliament and ruling party that clung to the idea that society existed for the sake of the landed classes. The Second Reform Act was perhaps a natural sequel to the First Reform Act despite being thirty-five years later. It probably went further than the majority of M.P.s wanted even though the parties realized that the time was right for further reform. Although Gladstone had introduced a Reform Bill in 1866, Disraeli attacked it using support from anti-reform rebels within the Liberal party. When the government resigned, Disraeli, as Chancellor of the Exchequer introduced his bill. The impact, although small in percentage terms, was that the electorate doubled from about 1.1 million to over 2 million and a large number of working-class men received the vote for the first time. ...read more.

In addition as more people became politicised they wanted to play a greater role in their communities, both at local and national levels. The new distribution of seats meant that constituencies were often grouped by class; middle-class suburbs, working-class inner city areas and landed-class counties. By creating a framework for a class based political system the Third Reform Act took a large step towards a greater democracy. Q. What arguments were used, in the years 1867-84 by those who supported parliamentary reform? With the passing of the Second Reform Act in 1867 some people felt that their aim to establish political democracy was beginning to become a reality. For others it was seen as a stage in the establishment of a new economic order of society. This Act, in some ways more radical than either the Liberals or the Conservatives originally intended, marked a development in the British parliamentary system. Those who, during the period up to 1884 supported reform, concentrated on pushing at the boundaries of the reforms. ...read more.

This obstructive attitude provoked Radical agitation and resulted in the beginnings of a conflict between the Peers and the people. Even the Queen tried to get the Lords to take a more conciliatory attitude. The Radicals used the slogan about the Upper Chamber 'Mend them or end them!'- showing a desire to get rid of the Lords and Joseph Chamberlain expressed his contempt for Lord Salisbury, who was responsible for the impasse, by saying:- "Lord Salisbury constitutes himself the spokesman of a class- of a class to which he himself belongs, who toil not neither do they spin."** The coming of democracy in Britain was a slow process. Most M.P.s saw no ideological reason to extend the franchise, but once reform started, political one-upmanship determined that both parties should be seen to be supporting some kind of reform. Those who argued in favour of reform had to convince a sufficient number of M.P.s to adapt their ideas and commit themselves to extending the franchise and broadening the power base. As skilled workers became politicitized there was a meeting of minds between middle and working class radicals to achieve a greater democracy. ...read more.