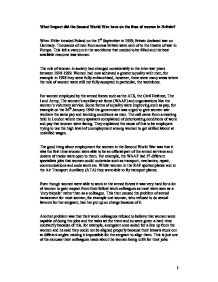 What Impact did the Second World War have on the lives of women in Britain? When Hitler invaded Poland on the 3rd September in 1939, Britain declared war on Germany. Thousands of men from across Britain were sent of to the theatre of war in Europe. This left a vacuum in the workforce that needed to be filled and the best available resource was women. The role of women in society had changed considerably in the inter-war years between 1918-1939. Women had now achieved a greater equality with men, for example in 1928 they were fully enfranchised, however, there were many areas where the role of women were still not fully accepted in particular, the workforce. For women employed by the armed forces such as the ATS, the Civil Defence, The Land Army, The women's auxiliary air force (WAAF) and organisations like the women's voluntary service. Some forms of equality were improving such as pay, for example on the 26th January 1940 the government was urged to give women war workers the same pay and working conditions as men. The call came from a meeting held in London where many speakers complained of deteriorating conditions of work and pay that women were facing. They explained the cause of this to be employers trying to use the high level of unemployment among women to get skilled labour at unskilled wages. The good thing about employment for women in the Second World War was that it was the first time women were able to be an official part of the armed services and dozens of trades were open to them. For example, the WAAF had 57 different specialists jobs that women could undertake such as transport, mechanics, repair, communications and code work etc. ...read more.

The clothes rationing rules were so complicated and confusing for most people that the government had to issue a booklet to try and help people understand the system. During the war labour shortages meant that prices increased dramatically, especially for items that weren't rationed. Because of this, a lot of clothes and fabric shops offered remaking services, for example by turning last season's coat into a new two-piece suit, this meant making their clothes last longer and making the rations go further. Knitting also became a national female obsession. Various schemes such as the re-making services: Save and Sew, and Make do and Mend, encouraged people to make their clothes to last longer and leading designers to participate in the utility schemes which aimed to make the most excellent use of materials to manufacture practical clothing. Almost two years after the clothes ration books were brought into practice, the board of trade conducted a survey and found that by introducing clothes rationing the country had so far saved over six hundred million pounds. It found that on average most households now only spent thirty pounds a year on clothing compared to it being over twice this amount before the war. The survey showed clothes rationing to have benefited the country in it's contribution to the war as the lack of clothing being made meant that thousands of clothes workers could be freed up to go and work in the war factories. The most women having to work full-time, look after the children, carry on with the housework without the help they received pre-war and also having to ration their clothes and food, this would be a struggle enough for most. ...read more.

Also middle class women who pre-war had been expected to look at the home and their children were now being called back to work particularly the teaching profession and also lower class wives and mothers were now also expected to work because they had been able to cope with the double burden during the war so they was no reason why they couldn't cope now. A lot of employers also made working hours more flexible so that women could continue to participate in the workforce meaning greater in equality between men and women in the workforce more so than pre war and during the war. Even though a lot of women did return home after the war, many did continue to work as they was seen as major social change as many women had not worked before the war and were not expected too, but now with their new found freedoms and independence a lot wanted to continue as they enjoyed working. All women gained freedom and independence during the women and the women's movement found this to be their source of inspiration, even though many believe that this was taken away from women after this is not really true as a lot of women chose to return to their homes and be seen again as wives and mothers rather than as workers. So on the whole I believe that during the war women were given a new found freedom and many chose to give this up after the war and return to being dependent on their husbands showing that a lot of women maybe did not want new independence and freedom, also overall, the women did not emancipate women but did bring about a lot of positive social changes for them which may eventually lead to the emancipation of women. ...read more.