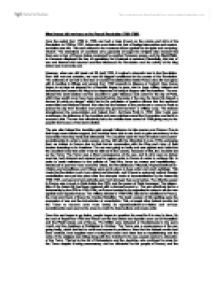 What impact did war have on the French Revolution 1789-1799? Over the period from 1789 to 1799, war had a huge impact on the course and aims of the Revolution. In 1789 to 1791, before war even broke out, fear of foreign intervention and counter-revolution was rife. This was evident in the measures taken against the �migr�s and non-juring Church. The desertions of countless army generals amongst the �migr�s also showed that there was a fear of France being conquered by another European power, and the King's Flight to Varennes displayed his fear of opposition, be it internal or external. Essentially, the fear of war and internal and external enemies influenced the Revolution and the activity of the king before war even broke out. However, when war did break out 20 April 1792, it marked a dramatic turn in the Revolution. From this moment onwards, war was the biggest conditioner for the course of the Revolution. The outbreak of war led to the fear of counter-revolutionaries inside France who did not agree with it, leading to killings and arrests from 1792 onwards to dispose of 'traitors'. New forces began to emerge as support for a Republic began to grow, due to huge military defeats and desertions that caused the King to be suspected of being in league with the Austrians. ...read more.

The British were defeated at Hondschoote in the same month and the Austrians at Wattignies in October. The Terror was a consequence of the war going badly, which had led to revolt and economic problems. Now that the federal revolts had been crushed, food supplies were moving into towns and cities due to requisitioning and the value of the assignat was rising along with the victories in the war, people wanted a relaxation of the Terror. This led to the fall of Robespierre and the Jacobins, who continued to press for the Terror despite it being unnecessary and too dictatorial for the people of France, and the measures they took in order to preserve the Terror which lost them the support of the people of Paris, especially the sans-culottes who again lost influence and power and were left weakened from Robespierre shutting down their organisations, such as the Cordeliers Club. The Terror and its leaders were then overthrown in the coup of Thermidor due to its dictatorial, ruthless methods. The events of the coup of Thermidor effectively meant the rejection of government by Terror. The Terror was dead although its violence would continue, as peace had not been made with the First Coalition yet. Further on, after the Thermadorian reaction had taken place and the Directory introduced as the Constitution of Year III, war led the Directory to seem to be successful and prestigious due to its huge successes in foreign policy. ...read more.

These involved requisitioning to prevent further food shortages and conscription. These policies were met with huge federal resistance, a good example being the Vendee Rebellion. In order to crush this resistance, organisations such as the representatives-on-mission and the Revolutionary Tribunals were created to restore order in France. However, when order was restored and the war was going well in 1794, people began to question the necessity of the Terror. This led to the fall of the Jacobins in 1794, and the creation of the Directory in 1795. The Directory's success relied mainly upon the war - when the foreign policy was hugely successful, like Napoleon's campaign in Italy, the Directory did well; but when the wars began to go worse, like the Battle of the Nile, the Directory could not cope, due to its huge reliance upon the army and the financial benefits foreign conquests helped with. War was effectively a huge factor in the failure of the Directory in 1799. This demonstrates the huge part war had to play in the French Revolution. Almost everything that happened in France after 1792 was caused, or affected by the war. The war destroyed the consensus of 1789 and led directly to the fall of the monarchy, civil war and the Terror. ...read more.