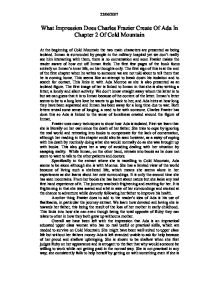 At the beginning of Cold Mountain the two main characters are presented as being isolated. Inman is surrounded by people in the military hospital yet we don’t really see him interacting with them, there is no conversation and soon Frazier makes the reader aware of how cut off Inman feels. The first few pages of the book focus entirely on Inman’s inner life, on his thoughts only. The first sign of this is at the end of the first chapter when he writes to someone we are not told about to tell them that he is coming home. This seems like an attempt to break down his isolation and to search for contact. This links in with Ada Monroe as she is also presented as an isolated figure. The first image of her is linked to Inman in that she is also writing a letter; a lonely and silent activity. We don’t know straight away whom the letter is to but we can guess that it is to Inman because of the content of the letter. Inman’s letter seems to be to a long lots love he wants to go back to her, and Ada hints at how long they have been separated and Inman has been away for a long time due to war. Both letters reveal some sense of longing, a need to be with someone. Charles Frazier has done this so Ada is linked to the sense of loneliness created around the figure of Inman.

Frazier uses many techniques to show how Ada is isolated. First we learn that she is literally on her own since the death of her father. She tries to cope by ignoring the real world and retreating into books to compensate for the lack of conversation, although her reading in this chapter could also be seen however, as a away of coping with his death by routinely doing what she would normally do as she was brought up with books. This also gives her a way of avoiding dealing with her situation by escaping reality.  While Inman, on the other hand, retreats into books as he does not seem to want to talk to the other patients and doctors.

Specifically in the extract where she is travelling to Cold Mountain, Ada seems to be alone although she is with Monroe. She has a limited view of the world because of living such a sheltered life, which means she seems alone in her experiences as she learns about her new surroundings. It is only the second time she has seen mountains. From her books she has learnt about nature but she lacks any real first hand experience of it. The journey was both frightening and exciting for her. It is frightening in that she was scared and a bit in awe of her surroundings and excited at the chance to adventure while devoutly following her father to improve his health.

Another thing Frazier does to add to the reader’s idea of Ada is his use of flashbacks, in particular the journey extract. We learn how devoted and loving she is towards her father, this being the result of the loss of her mother in early childhood. This links into how she can even though being the total opposite of Ruby they can relate to other in how they both grew up without a mother.

Overall we have been left with the impression that Ada is an impractical educated upper class woman who has no real useful or practical skills, which are needed to survive on Cold Mountain. She might have been well suited to upper class life but without her fathers money Ada is left stranded unable to ask for help because of her proud and shallow upbringing. She is shown to be shallow when she first judges Ruby on her appearance and is arrogant to the fact that why would someone be willing to work while not getting paid in the normal way. She is not practical in any way; she consistently fails to help herself by getting on with something even if she is morning the death of her father. Most people would either ask for help or just get on with whatever needed doing to survive she seems to sulk and do nothing, Ruby’s arrival at the end of the chapter will hopefully change her in to wanting to help herself.